Blinded By Greed And Lust For Power 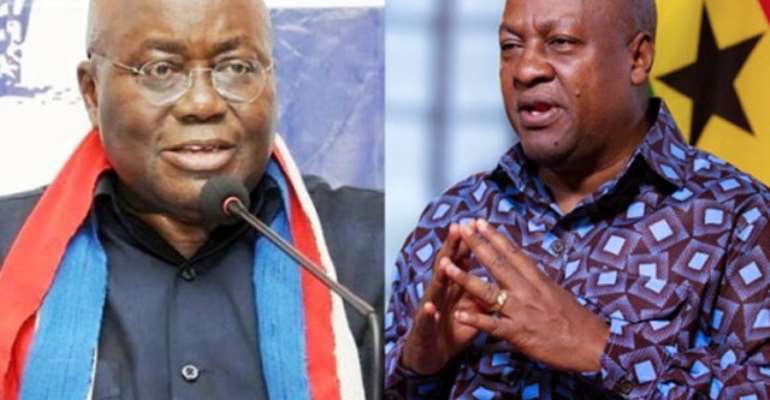 When I was growing up in my 'holy' village, there was a transport owner who had the following inscription boldly written in front and at the back of his trucks: “Let my enemies live long and see things for themselves”.

As I was growing up, I came to understand the real meaning of what the man wrote. In the course of your struggle, your enemy would be happy to see you struggling but if you don't pray for your enemy to live long, he will not see and hear your success stories in future. In my home town, our elders always admonish us to close our ears when we know we are doing the right thing. If we allow ourselves to be distracted and lose focus, we will not see glory that will come alongside our efforts to excel, they told us. They said “when glory is displayed openly, one has to pass through fire and brimstone to grab it.”

Posterity will not forgive Nana Addo and his government if they succumb to unnecessary criticisms and rest on their oars and allow those who wish them failure to have their day. The world is on their shoulders and there is no time to lose or turn back.

As I wrote the other day, it is always easy to destroy than to build. In an attempt to 'plunder' this dear nation of ours, these NDC nation destroyers did not look back to see the damage done and the worse scenario of a bad legacy they would leave behind for generation yet unborn to inherit. It takes courage, determination and hard work to fix what has been ruined for many years. This country was riding high on its way to the Eldorado that we dreamt of when we attained independence when the NDC came to power only to turn the cart upside down. In fact, they took eight years to do the demolition exercise.

Take the issue of cocoa for example. With the introduction of the Cocoa Mass Spraying programme, this country was able to hit the one million metric tons mark under the Kufuor administration. The programme was non-partisan and every cocoa farmer, irrespective of his or her political affiliation, benefitted from the programme. When the NDC took over power from the Kufuor administration, they made sure the cocoa spraying gangs in all the cocoa-producing areas were disbanded and new ones formed made up of card-bearing members of the NDC party. In their case, they sprayed farms belonging to only NDC members and left those belonging to the NPP supporters. What they foolishly failed to realize was that if for example you spray a farm infested with the 'akate' insects and leave the other farms, the insects will fly to destroy the farms you did not spray and would surely come back to consume those sprayed in a matter of time. That was why by the time they lost power, cocoa production had taken a nose dive. And to add insult to injury, they supplied farmers with expired fertilizers. The current administration is working so hard to bring back the glorious days. Hard as these NDC communicators try to incite the cocoa farmers against the government it fails to materialise because the Akans say “it is only a fool who will allow his scrotums to be trampled upon two times”. Ghanaians and cocoa farmers for that matter have wised up and will never fall into the trap again.

For now, Ghanaians deserve to complain of hardship because the current administration inherited a very weak and wretched economy. When a ship is in troubled waters, it takes a captain who has the courage to steer the ship safely ashore. Anytime I listen to the pronouncements of the president as far as the economy is concerned, I see good things coming the way of Ghanaians very soon. He has the conviction and he believes that everything will be alright. Battles are won with commanders who believe in themselves and also believe in their soldiers. The president believes in Ghanaians and Ghanaians believe in him. That is the difference between Mr. Mahama and Nana Addo. In fact, it was Mr. Mahama himself who told Ghanaians that he is indecisive in his book titled “My First Coup D'état”. If you have an indecisive commander leading a battle, failure is your portion.

You see, governance is a serious business. It is not about trial and error. If you are given the opportunity to rule a nation, it is a call upon you to work for the welfare and comfort of your people but not a call to get rich quick like Mahama and his cohorts did to Ghanaians. Of course, Mahama can continue to tickle himself. After all, nobody can stop him as he continues his 'suicide' trip.

But what someone out there should tell Mr. Mahama is that the days of Norman the Gambler are gone with the win. For now, the man can sit in his comfort zone and dream of coming back to power and no one has the right to tell him to stop dreaming. What is worrisome is that this ex-failure is getting on our nerves day in, day out. In his quest to taste power again, Mahama will do everything to emerge the winner of the NDC primaries. He has already taken a quantum leap before his other contestants. He hijacked the so-called unity walk of the party and was the only key speaker after such walks which were done in all the ten regions of Ghana. He has the money and logistics.

If I were one of the contestants, I would step aside and leave him to go alone and taste his second humiliating defeat at the polls in 2020. As for me and people like me, on the day that the NDC delegates vote for Mahama to become the flagbearer of the party, I will visit my father's 'kraal' and ask the Fulani herdsman to get me a calabash full of fresh milk to quench my thirst.