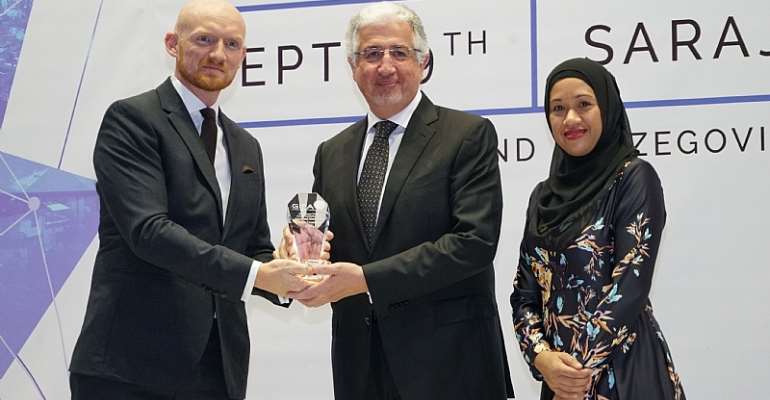 Since its inception in 2008, ITFC, a member of the Islamic Development Bank Group (IsDB), has risen to become one of the world's most important facilitators of trade and financing in Organization of Islamic Cooperation (OIC) countries.

Commenting on the occasion, Eng. Sonbol said, “ITFC is honoured to accept this Award from GIFA, which comes at a momentous milestone as we commemorate 10 years of development impact. The Award is a validation of ITFC's founding values of advancing trade and improving lives through Islamic trade finance. The recognition underscores the ever growing importance, relevance and viability of Islamic trade finance in rising above today's global market volatility to do its part in facilitating a new era of global trade. ”

Over the past 10 years, ITFC has played a pivotal role in supporting its Member Countries to access trade finance and create development impact across a range of areas including economic growth, job creation, youth empowerment, poverty alleviation and access to electricity. To date the Corporation has provided over US$ 40.2 billion in financing to meet its Member Countries' needs. Since inception, almost 70% of its transaction volume went towards supporting intra-regional trade amounting to US$ 28.5 billion.

In line with its new Strategy and to respond to the needs of member Countries, ITFC in 2017 took major steps to enhance synergies between trade finance and trade development to achieve ITFC's three main strategic objectives of expanding intra-OIC Trade, supporting the diversification process of Member Countries' economies and driving global growth of Islamic finance.

GIFA 2018 presented awards in more than 60 categories to celebrate the success of institutions and individuals from around the world who are charting new territories in the world of Islamic trade and finance. The Award has grown over the years to become one of the highly coveted and most respectable market-led awards in Islamic banking and finance in the world. Past GIFA Laureates have included His Excellency Ismaily Omar Guelleh, President of the Republic of Djibouti (2017) and His Excellency Joko Widodo, President of Republic of Indonesia (2016) amongst many other illustrious and notable world leaders.

About the International Islamic Trade and Finance Corporation (ITFC):

The International Islamic Trade Finance Corporation (ITFC) is a member of the Islamic Development Bank (IsDB) Group. It was established with the purpose of advancing trade among OIC member countries, which would ultimately contribute to the overarching goal of improving socioeconomic conditions of the people across the world. Commenced operations in January 2008 (Muharram 1429H), ITFC has since consolidated all trade finance businesses that used to be handled by various windows within the IsDB Group. Earning the A1 rating by Moody's reflects the Corporation's efficiency in service delivery by responding swiftly to customer needs in a market-driven business environment.