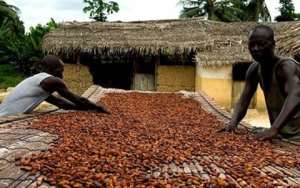 Ghana, the world's second cocoa grower, has maintained the guaranteed price it pays farmers at GH7,600 per tonne for the 2018/19 main crop harvest.

Agric Minister, Dr Afriyie Akoto made the announcement whiles addressing cocoa farmers and other stakeholders in the cocoa industry at the 2018 Cocoa Day event.

“The 2018/19 cocoa season which starts on Friday, October 5, has been officially announced. The government in consultation with stakeholders has decided to maintain the producer price for cocoa at GHâ‚µ7,600 per tonne or GHâ‚µ475 per bag of 64 Kilograms (KG),” he stated.

The timing for the announcement of cocoa producer price was concurrent with Ivory Coast, a move expected to check smuggling between the two countries. Minister for Agric,

Dr Afriyie Akoto Osei explained the move to maintain prices was to cushion farmers against losses incurred from the declining cocoa prices.

Ghana and Ivory Coast which control about 60 per cent of the global cocoa stock have in recent time strengthened cooperation in an effort to streamline marketing, economics, production and research activities of cocoa to enable both countries to reap the full benefits of trading in the crop. Aside from announcing the producer price on the same day, both countries in a joint action plan have committed to implementing common programs to promote domestic processing and consumption of cocoa in their respective countries.

Meanwhile, Ivory Coast, the world's leading producer of cocoa, raised the guaranteed price it pays farmers to 750 CFA francs ($1.34) per kilogram for the 2018/19 main crop harvest.

Crop output for the 2018/19 season is expected to be mostly unchanged at slightly under 2 million tonnes, Chairman of Ivory Coast’s Coffee and Cocoa Council Lambert Kouassi Konan said at a ceremony to mark the start of the season.

"The guaranteed price for the whole territory is fixed at 750 CFA per kilogram for this season. No changes will be tolerated," Konan said.

Konan also said that a registration tax on farmers had been reinstated to 1.5 per cent of the per-kilo price of insurance and freight paid by buyers. The tax was eliminated during the past two seasons in order to boost farmers' revenues.

President Akufo-Addo and President Alassane Ouattara have reaffirmed their commitment to define a better, common strategy and a sustainable solution for the improvement of prices for cocoa producers, in their respective countries.

They also committed themselves to harmonise their cocoa marketing policies and agreed to announce, every year, in a concomitant manner, and before the beginning of the campaign, the price to cocoa producers.

Additionally, Ghana and Cote d’Ivoire have agreed to intensify collaboration, in the field of scientific research for the production of cocoa plants, the improvement of plant varieties, and also to adopt and implement a regional programme to fight against the swollen shoot disease.

A commitment by the two countries to process a major part of cocoa, and the invitation of the private sector, notably the African private sector, to invest massively in the cocoa processing in Africa, was also reached.