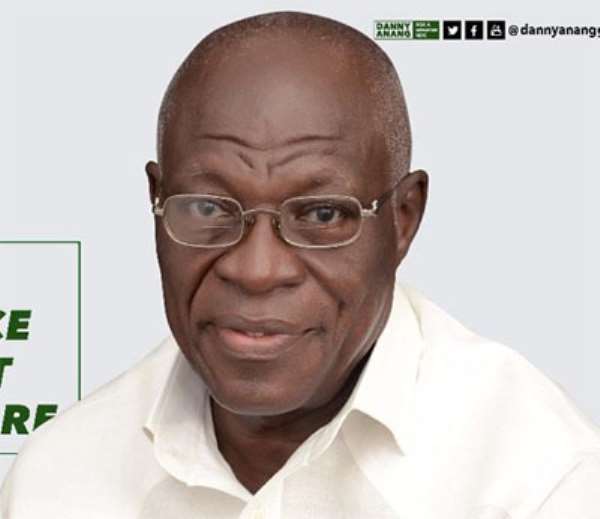 Apart from Danny who has declared his intention to contest the position, others including Samuel Ofosu Ampofo, Alhaji Huudu Yahya, Dan Obodakpi and Betty Mould-Iddrisu are also gunning for the position.

But it seems Danny Anang is likely to become the next party chairman as the clock ticks for the November 3, 2018, elections.

One of the vociferous members of the NDC on radio, Samuel Ofosu Ampofo, who was made Director of Elections of the party in the 2016 elections which saw their defeat, has come under a barrage of attacks in the last couple of weeks largely due to his inability to provide a concrete report about that crucial contest which sent them into opposition.

Almost two years after suffering what many supporters of the NDC have described as a humiliating defeat at the hands of the ruling New Patriotic Party (NPP), Ofosu Ampofo has not been able to provide the party with a total of all collated results, putting his credibility at stake.

Meanwhile, he was said to be the one who gave the leadership of the NDC false hope which led to Koku Anyidoho's infamous statement 'we are in a comfortable lead' in the heat of the December 2016 elections when in reality the party was losing.

Ofosu Ampofo has been struggling to redeem his image in the party since the issue came up for discussion with virtually nothing to show for his stewardship in that position, with the collated results of the 2016 election results still not forthcoming.

However, he is considered one of the front runners since he is said to be pumping lots of cash into the campaign.

Even though he has occupied a number of positions in the NDC as a party and also in government, he has not been able to assert himself among the top members in the party with a strong voice and influence.

He is often considered the 'laid-back of a back-bencher' or background person in the party even with his background as a revolutionist.

Therefore, he is not considered a front runner in the race.

Dan Abodakpi
In the case of Dan Abodapki whose hails from the Volta Region which is considered the 'world bank' of the NDC where they bag most of their votes in any given general elections, he is still struggling to market his brand, not for the fact that he is not so known in the party; he has not managed any structure of the party except a number of backroom committees he has served on.

Apart from that, he is also seen as a not-so-friendly a person who easily warms or endears himself to people; he does not open up to party members.

Therefore, his candidature does not seem to be flying as one would have expected.

Betty Mould
The only woman in the chairmanship race is Madam Betty Mould-Iddrisu. It would be a great wonder if she manages to sail through to become Chairperson of the NDC.

Even though she is married to one of the stalwarts of the NDC party, the famous Chairman of Council of State under the erstwhile Jerry Rawlings regime, Alhaji Mahama Iddrisu, she is considered as coming with a baggage, especially when the NPP government has not begun prosecuting members of the former NDC administration found to have engaged in some wrongdoings.

The mere mention of her name, like that of Barton-Oduro, invokes memories of the infamous Woyome scandal which led to the payment of some GH¢51million dubious judgment debt to NDC businessman, Alfred Agbesi Woyome.

Betty is said to have ordered the payment in spite of a caveat issued by late President Mills against it.

Apart from that, people wonder how she would be able to mend fences and work with the founder of the NDC, Jerry Rawlings, whom she at some point questioned his commitment to the party.

Danny Anang
Danny Anang seems to be the obvious choice for the NDC as some key and influential members of the party would want us to believe.

Having served in various capacities from the constituency, regional to the national levels of the party, he is seen as the man for the job.

His is considered accessible and approachable since he runs an open door policy.

During his leadership as Greater Accra Chairman, 18 out of the 26 Parliamentary seats in the Greater Accra Region were won by the NDC and wrestled power from the NPP in 2008.

When elected, he has committed himself as part of his campaign message to rebuild the structures of the party, resource it, redirect the energies of members with an agenda to recapture power.