The Weirdest U.S. Weather Events Of 2018 So Far 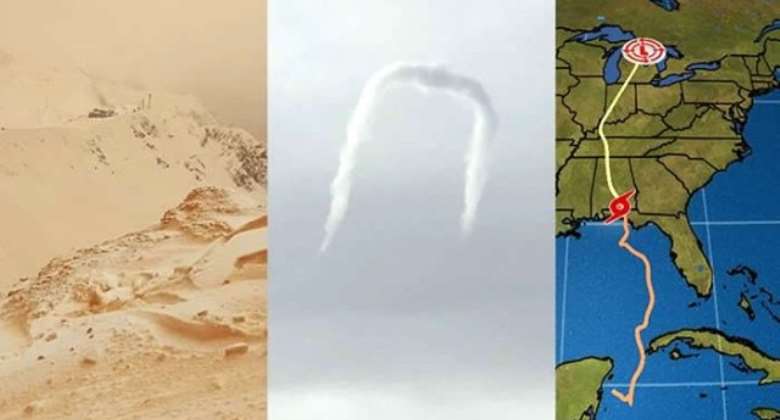 We've already seen our share of winter storms, severe weather, cold outbreaks, flooding and droughts so far in 2018. But there are some weather events every year that are downright strange, and this year is no exception.

The events we consider strange are weather phenomena happening repeatedly in one place, in a place where you wouldn't think they would occur or during an unusual time of year. Some are phenomena you may not find in a Weather 101 textbook.

Here are some of weirdest weather events we've seen so far in 2018, in chronological order.

Freezing rain in Florida
Just after New Year's Day, Winter Storm Grayson blanketed Tallahassee, Florida, with its first measurable snow since 1989, and the first January such occurrence, there, in records dating to 1885. That's eye-catching enough. What was even more bizarre was seeing an ice accumulation map involving the Sunshine State. Up to a quarter inch of ice accumulation was measured in Lake City, and light icing on elevated surfaces was reported as far south as Levy County.

February 80s in New England
The heat in New England Feb. 20-21 was the "most extraordinary heat event to ever affect the Northeastern quadrant of the U.S. during the month of February, since official records began in the late 1800s," according to Weather Underground weather historian Christopher Burt. All-time state February heat records were tied or broken in eight states, including 77 degrees at Wells, Maine, 80 degrees at Fitchburg, Massachusetts, 83 degrees at Harrisburg, Pennsylvania, and 80 degrees at Cincinnati's Lunken Airport.

The four-Easters
Perhaps as payback for the summerlike February heat wave, four nor'easters – Winter Storms Riley, Quinn, Skylar and Toby – in three weeks brought misery to millions along the Eastern Seaboard in March 2018. Incredibly, a fifth low-pressure centre was a bit too far offshore near the end of March to join the fearsome foursome from earlier in the month.

A horseshoe cloud
While the nor'easter parade was hammering the East Coast, a bizarre cloud was captured in video over Nevada in early March. As meteorologist Jonathan Belles explained, this rare horseshoe vortex is fleeting, lasting only minutes, when a relatively flat cloud moves over a column of rising air, which also gives the cloud some spin.

A State record hailstone
Alabama's notorious history of severe weather, particularly tornadoes, is well documented. On March 19, however, it was a hailstone that captured meteorologists' attention. One softball-size hailstone near Cullman, Alabama, was found to set a new state record, more than 5 inches in diameter.

Orange Snow
Just after spring officially arrived in late March, a plume of dust tapped by southerly winds from north Africa, lead to the sight of orange snow over parts of eastern Europe. While not unheard of, this particular orange snow event observed in parts of Russia, Bulgaria, Ukraine, Romania and Moldova featured higher concentrations of dust than usual, according to the BBC.

New U.S. rainfall record?
Less than eight months after Hurricane Harvey smashed a rainfall record for any U.S. tropical cyclone, a deluge in Hawaii appeared to have set another U.S. rain record. A location on the island of Kauai measured 49.69 inches of rain in just 24 hours from April 14-15. If that is verified, it would top the U.S. 24-hour rain record of 43 inches in Alvin, Texas, during Tropical Storm Claudette in July 1979.

Apriluary, then a record warm May
The coldest April in 21 years for the Lower 48 states was followed by the hottest May, in NOAA records dating to 1895. Climate scientist Dr. Brian Brettschneider wrote this was the largest area of Earth to undergo a record cold-to-warm shift in consecutive months in the last 100 years. Minneapolis-St. Paul went from its heaviest April snowstorm of record in mid-April to a Memorial Day high of 100 degrees in just six weeks.

New England long-track tornado in May
A 36-mile long EF1 tornado May 4 in western and central New Hampshire was one of the longest on record in New England. As strange as an early-May tornado of any kind is in New Hampshire – its typical peak tornado month is July – perhaps the most amazing aspect to this was how the tornado was discovered. The National Weather Service office in Gray, Maine, gathered public storm reports, then surveyed relatively remote parts of New Hampshire 10 days after the tornado to piece together its path.

Subtropical cyclone off Chile
The northeastern Pacific basin's hurricane season starts in mid-May. In early May 2018, however, a bizarre subtropical cyclone formed in the southeast Pacific Ocean, off the coast of Chile. This appeared to have been a first-of-its-kind storm to form over this typically colder stretch of the southeast Pacific Ocean, according to long-term records.

Wildfire spawns a severe thunderstorm
Lightning from thunderstorms can often trigger wildfires. On May 11, however, heat generated from the Mallard Fire southeast of Amarillo, Texas, generated not just a photogenic pyrocumulus cloud, but also triggered a severe thunderstorm that ended up dumping quarter-size hail in Wheeler County, Texas, just over 60 miles away.

In less than a week in May, a pair of tropical cyclones took unusual tracks in the Middle East. First, Tropical Cyclone Sagar tracked almost the entire length of the Gulf of Aden before landfalling in far western Somalia on May 19, the country's strongest and westernmost in records since the mid-1960s. Six days later, Tropical Cyclone Mekunu moved ashore near Salalah, Oman, the first Category 3 landfall in southwest Oman in modern records, dumping over 24 inches of rain in four days in the city.

Alberto is pure Michigan
After a Memorial Day landfall in the Florida Panhandle, deep moist air and the lack of strong shearing winds kept what was once Subropical Storm Alberto's remnant circulation intact well inland, to the degree that NOAA's Weather Prediction Center didn't issue its final advisory until Alberto was just southwest of Alpena, Michigan, on May 31. The only other tropical cyclone to have tracked within 75 miles of Alpena since the mid-20th century, according to NOAA, was Connie, as a tropical storm in August 1955. As The Weather Channel senior meteorologist Stu Ostro pointed out, this was also a highly unusual track for May.

Two Wyoming EF3 tornadoes in less than a week
In the first six days of June, a pair of EF3 tornadoes tore through areas near Gillette and Laramie, Wyoming, the first F/EF3 or stronger tornadoes in the state since 1987. Wyoming's low population density typically minimizes the chance of a tornado hitting structures or even trees to allow the National Weather Service to rate a tornado. The June 6 tornado north of Laramie scoured grass from the ground, allowing the NWS to rate it EF3.

Snow after summer arrives
Imagine shoveling snow five days after the summer solstice. This happened on June 26, when a storm off the coast of Newfoundland had just enough cold air to blanket parts of the island with snow, prompting plows to be called out. It was one of the latest-in-season snowfalls on record in Gander. Kids had to to trudge through snow during their last week of school before summer vacation.