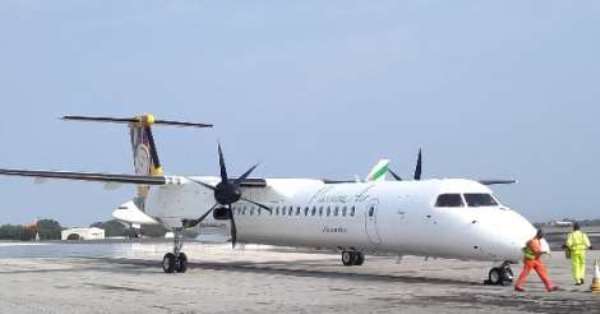 The acquisition of the 78 seater aircraft by Ghana's second airline will boost the company's commencement of two daily flight from Accra to Tamale from Tuesday October 2.

PaasionAir says in a statement that the new daily route is aimed at "expanding options for Ghanaian domestic travellers."

In addition, the local airliner says the initiative represents an addition to Passion Air's daily Accra to Kumasi flights and is expected to allow same day and evening connections from Europe to Tamale via Accra and vice versa.

"This is a travel option that has been long sought by various stakeholders considering the time we will be flying," release from the company said. "The flight is being promoted in conjunction with our partners including the media and they are indeed pleased to be able to offer this option to all international travellers."

The second flight's schedule from Tamale which leave for Accra at 17:20GMT allows for connections to and from Frankfurt, South Africa, Amsterdam, London and Istanbul and opens up other convenient travel opportunities to our passengers.

Also, passengers arriving from overseas in the afternoon will now have same day onward connection access to Tamale and even Kumasi on this new flight on a daily basis.

"The acceptance of the Q400 by the travelling public has been overwhelming," the Commercial Manager of the airline Anita Khoury is quoted as saying in the press release from PassionAir said.

'It has encouraged us to bring in a second aircraft to further expand our domestic outreach. Passengers have commended us of its comfort, ample baggage space and speed.'

Passion Air is expected to operate three fleets of 78 seater aircraft, Bombardier Dash 8 Q400 to three destinations in Ghana --Takoradi, Kumasi and Tamale -- but currently is operating one being Kumasi with Tamale to be added from October 2.

The airline has also now increased the number of flights to Kumasi to five from the initial three it started with.