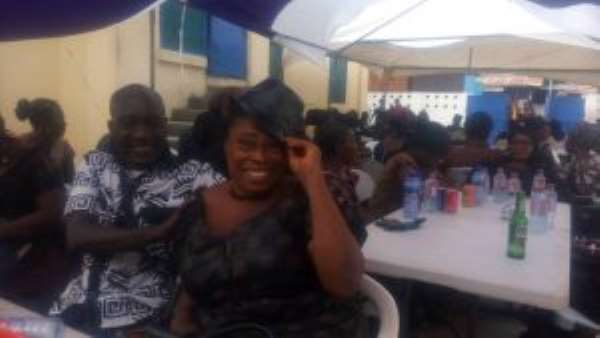 The Korle-Bu Teaching Hospital has exonerated its staff of any wrong doing in the death of a 50-year old woman on Monday September 17, 2018.

The family of the late Sheila Mansa Fugar accused the staff of turning their relative away in an ambulance over claims there were no beds.

However, after more than a week of investigations, Korle Bu Teaching Hospital says the family rather was impatient.

According to the family, the staff of Korle-Bu Teaching Hospital on duty the night they rushed in after glancing through their referral notes, remarked that the case was not pressing enough to be to be referred there.

Madam Sheila Mansa Fugar died the next day at the Ridge Hospital after oxygen in a smaller facility she was sent to run out.

However, the Public Relations Officer of Korle-Bu Teaching Hospital, Mustapha Salifu, has told Citi News the relatives of the deceased were not patient enough to be attended to while at Korle Bu.

He narrates the findings of the investigations as follows: “yes, the patient was brought to Korle Bu on Sunday and they met some of our staff. And then a request was made. An instruction was given to one of the staff members to do a triage while the patient was in the ambulance because at that time the place was full beyond capacity. When you are to do triage, it means you have to gather the necessary materials before you are able to do it. But in the process what we found was that the family could not wait for those materials to be gathered. And then they left Korle Bu for another facility”

The death of Madam Sheila Mansa Fugar has left the family in tears.

They believe she would have lived if Korle Bu attended to her earlier.

But Mr. Salifu says the hospital is not to blame as it made efforts to reach out to them.

“The moment a bed became vacant for them a call was placed to them and a follow up was made to the hospital by the person who was making the intervention for them to come to Korle Bu. But then the family explained that they wanted a facility that was closer to their home so that visiting the patient will not be that difficult. So they turned down the offer to take up the bed at Korle Bu emergency. That is what we have established. It's unfortunate that the person couldn't make it at another facility. But the fact must be established that attempts were made to get space for her, we didn't turn them away, attempts were made to do a triage before they could move to another facility” he insisted.

Mustapha Salifu assured Ghanaians of the best healthcare at Korle Bu while appealing to smaller hospitals to refer only dire cases to Ghana's premier tertiary hospital.

“It's unfortunate for somebody to die. But then, the person didn't even die in Korle Bu Teaching Hospital. To lose a life is painful particularly to the immediate family. When you are seeking to get care and you don't have it immediately you may have to go to another facility when you have the confidence that if the person is admitted to Korle Bu the person will get the best of care.”

“So what we are saying is that, yes, the facility has been expanded. Other facilities need to support us so that Ghanaians can continue to derive the maximum benefits from the investments made in the hospital by government. And they can do that by referring the dire emergencies that require the tertiary level of care. So that the space can be reserved”.

In June 2017, the Ghana Health Service admitted that stronger systems are needed to curb incidents of Ghanaians dying over the lack of beds at hospitals.

This came after a 70-year-old man, Prince Anthony Opoku-Acheampong, reportedly died in his car at the LEKMA Hospital at Teshie, after seven hospitals turned him away over claims there were no beds.

The Ghana Medical Association has said medical practitioners cannot be blamed for the poor healthcare system in the country.

This was after some patients who visited the Korle Bu Teaching Hospital in excruciating pain had to buy plastic chairs to enable doctors and nurses attend to them.

The move followed the Ministry of Health's directive to hospitals not to turn away patients who arrive with emergency cases even if there are no beds to accommodate them.

Citi News' Nii Armah's visit to the Korle Bu Surgical Medical Unit revealed that other patients who could not afford plastic chairs were attended to on the bare floor in a congested room.

Speaking on Eyewitness News, the General Secretary of the GMA, Dr. Justice Yankson attributed the situation to the g overnment's failure to invest in the health sector .

“Truth be told this is part of the bigger challenge that we are all facing and to a large extent, as a country we are trying to play ostrich. Basically, this is our problem; our emergency medical services are not in the best of state.