Fully Funding The TB Response Is A Smart Investment 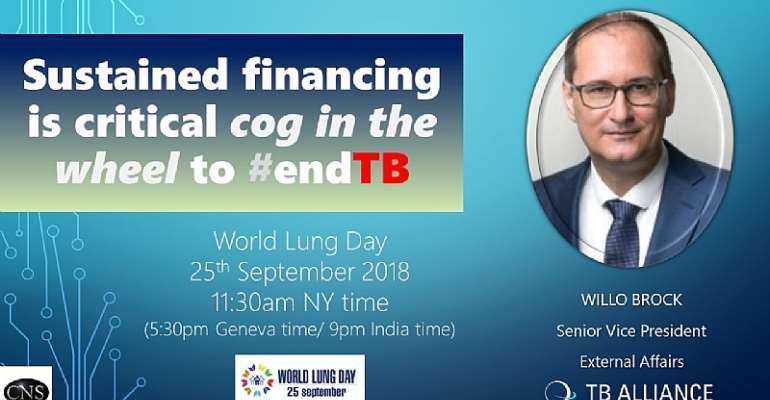 (CNS): As per WHO’s Global TB Report 2018 financing for TB prevention, diagnosis and treatment continues to fall short of the amount needed and commitments from both domestic and international donor sources need to be stepped up.

Recognising this lack of sufficient and sustainable financing, the political declaration issued by member states at the recent first-ever UN High Level Meeting (UNHLM) to #endTB commits to increase the overall global investments for ending TB to reach at least US$ 13 billion a year by 2022; and also commits to close the estimated US$ 1.3 billion annual gap in funding for TB research, ensuring that all countries contribute appropriately to TB research and development.

Willo Brock, Senior Vice President (External Affairs) at TB Alliance (Global Alliance for TB Drug Development), has extensive experience in resource mobilization in global health. He was in exclusive conversation with CNS (Citizen News Service) on the sidelines of the UNHLM to end TB in New York. Willo provides strategic leadership to the organisation’s fundraising, advocacy and policy, and community and stakeholder engagement work.

Here are some excerpts from the interview:

CNS: Why do governments not see investing in TB as a smart business case, despite evidence that for every $1spent on reducing TB incidence can generate benefit of $33?

Willo Brock: "It is true that TB creates huge financial burden on people and economies. Even in those countries where diagnostics and treatment costs are covered by the public healthcare system, families are known to spent about half their income on managing their TB treatment. According to one study, it is estimated that multidrug-resistant TB (MDR-TB) alone would cost the global economy a cumulative $16.7 trillion by 2050 and claim the lives of up to 75 million people. So there is big impetus to act. But the costs and the benefits are not at the same scale. Costs are often borne by poor families and not necessarily by the governments. Also, the investments in drug development do not yield immediate gains as R&D is a long term process. But politicians tend to like short term results and not long term investments that give return over a long time period.

CNS: Why has the private sector not been that proactive in funding the fight against TB?

Willo Brock: Companies think in terms of markets and not in terms of scale. Millions of people affected with TB does not mean a huge potential market for them. TB predominantly hits poor people and poor communities and the private sector does not view this as a place where they can make money. That is where organisations like TB Alliance come into play to leverage partnerships, bring public and private sector together and mobilise resources and then have products that are affordable and universally accessible to all those patients who need them.

CNS: Even though the need for new and better diagnostics and treatment for TB is growing why is TB research an development so under- funded?

Willo Brock: Globally, for the high income countries it is about ‘out of sight, out of mind’. They have a much less problem of TB at a much smaller scale. So they do not feel the need to invest in the interest of their own people. If we look at the BRICS countries-the emerging economies like Brazil, India, South Africa, Russia, China- they have almost 60% of the world’s MDR-TB. Yet they are spending less than 5% of their research money on TB R&D. They have to be better explained the urgency of the problem - that TB is a global health crisis and that they will have to increase their investment. Unlike most other diseases, TB anywhere is TB everywhere. Unless eradicated globally, TB will be a problem as long as people breathe. The recent UN HLM on TB has forced the heads of states to turn their attention to TB and the disease is now likely to get the recognition and urgent action it deserves.

CNS: What innovative and sustained financing mechanisms can help to fully fund the fight against TB, including R&D?

Willo Brock: First and foremost, every country must commit a fair share of their investment for innovation. We cannot rely only on high income countries to fund. The resolution adopted at UNHLM should have that exact phrasing. A country like India, for instance, has invested only 36% of its fair share in terms of its TB burden. Secondly, we have to hold our leaders to account. TB has been there for over 5000 thousand years. Why have heads of states not been asked before to commit to step up investments? While Ministers of Health are convinced as they understand the problem, but they need the help of Ministers of Finance and the heads of states to agree to step up investment in TB  for the sake of the people. So holding the heads of state to account is very important and an essential part of the solution to the puzzle called TB.

CNS: There is an increasing recognition that health security is critical for achieving SDGs. Is more attention to UHC and other health issues a threat or an opportunity for sustained financing for TB?

Willo Brock: I firmly believe that it is an opportunity. Expanding the sphere of assistance to people and connecting them to universal healthcare, will also increase their access to TB services. So increasing universal health coverage (UHC) is an important element of delivering TB treatment to everyone around the world. At the same time when countries invest in TB as a disease, they reduce the financial burden of their healthcare system. For instance, at the moment MDR-TB costs about 100 times more to treat than drug susceptible TB (DS-TB). So when we have new drugs to treat patients with MDR-TB, it is going to be much cheaper for everyone to get access to them. Also, the risk associated with TB (especially MDR-TB) as an infectious disease is one of the pillars of what is considered global health security threat. With new treatments coming up and being available for MDR-TB, we can bring that threat down. We can therefore say that these 3 issues - TB, global health security and universal health coverage - are inextricably linked and should be taken care of together and not as separate issues.

The first-ever UNHLM on TB was a landmark opportunity to marshal political will and make the UN member states step up the fight against TB. An important element of this summit’s resolution was that we can defeat antimicrobial resistance and TB if we close the funding gap for innovation. And hopefully this would be for everyone. So equitable approaches, for securing universal access to new drugs and diagnostics and vaccines, are essential. Patchwork national level solutions are slowing down the fight against TB. To address and solve the problem of TB, countries will have to work together, collaborate cross border globally and not look at TB as just a domestic issue."

(Shobha Shukla is the Managing Editor at CNS (Citizen News Service). Follow her on Twitter @Shobha1Shukla, @CNS_Health or visit www.citizen-news.org)