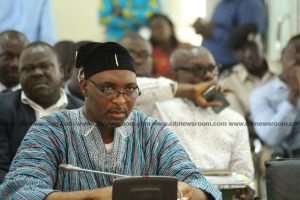 The Minority Chief Whip, Muntaka Mubarak, is seeking to drag the Ashanti Regional Minister, Simon Osei Mensah before Parliament over the report on the seven Asawase youth killed by police.

The Committee that was set up to probe the matter has presented its report to the office of the Vice President, but it has not been made public yet.

According to Muntaka Mubarak, who is also the Member of Parliemnt for Asawase, the Regional Minister must take steps to engage the Asawase community on the findings of the probe, an activity that has not been conducted so far.

Speaking to Citi News, Muntaka Mubarak said the Minister must appear before the House to provide clarity on the findings of the committee as a means of maintaining peace in the community.

Protests over killing of 7 Zongo youths In July 2018, hundreds of youth from the Zongo community trooped to Kumasi Central Mosque to register their displeasure over the killings of some seven youth the police claimed for armed robbers.

The Zongo community in Kumasi has in the past complained about perceived stereotyping that has led to the killing of multiple Zongo youth.

The leadership of the Zongo community in the Ashanti Region vowed to rise against such killings.

5 out of seven buried so far Five out of the seven deceased Zongo youth, suspected to be victims of police brutality have already been buried.