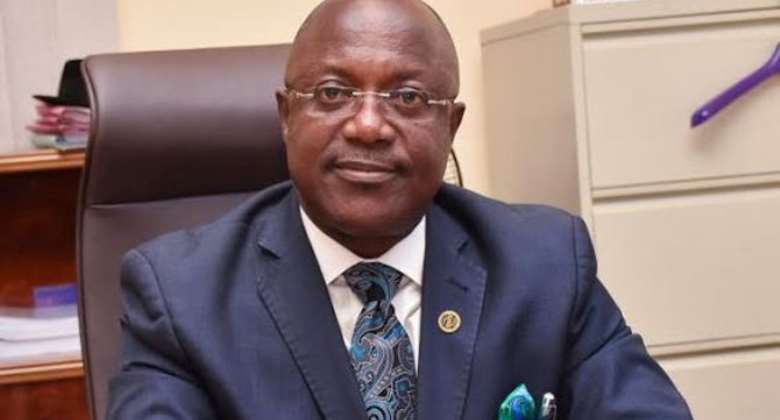 “Yesterday is not ours to recover, but
tomorrow is ours to win or lose”
Lyndon B. Johnson
36th President of the United
States of America
DEAR PROFESSOR, I CRAVE YOUR INDULGENCE to address this issue publicly for all Ghanaians to debate and learn lessons therefrom. I am not doing so out of spite or disrespect; nor am I attempting to expose a weakness for those opposed to the registration to cash in. “Far from the madding crowd”, let us say with Thomas Hardy.

It is such a huge task, a gargantuan one, placed on your head and I believe you will be able to cope. We pray you do. I have known you closely, intimately: we have sat in the same classroom, and have been taught by the same lecturers: you may remember CHK Lodoh who told one of our classmates: “You knew your age before you applied to come and read Law.” He was not going to relax his exams because some were old. At the Legislative Drafting class, you demonstrated your deep appreciation of the subject which required one to be patient and meticulous, and that one should have a good command of the English language, and that one should be lucid and free from ambiguity.

You may remember the nickname our colleagues gave me: 'keukeu saek', stemming from my pronunciation of 'cocoa sack': perhaps I would not have been the cynosure of all eyes if I had pronounced the phrase: 'Kookoo sak'- to show the Ghanaianness in my speech (call it 'locution' not 'slangs').

You and I have had a chequered history. While you were roughing it under illiterate parents at Juaso, I was equally doing the very things you were doing, under illiterate parents at Kokobra, near Fumesua. But you were a shade luckier: revenue from your parents' farm produce could afford you secondary school education. Of course, you were younger; I had to go to a Training College, after some years as a pupil-teacher.

You proceeded from the University of Ghana after your first degree in 1982 to do your PhD in Criminology in Canada, returning home to take up the post of Executive Secretary at Ghana's Reconciliation Commission in 2001. You have worked variously as a human rights advocate in Canada and earned the Associate Professorship at GIMPA.

Your book: 'Fighting Armed Robbery in Ghana' is a must-read for all security personnel, especially, the police.

You may remember April 2012 when you were a witness in the chieftaincy dispute at Juaso. I was at Manhyia and listened to your brilliant submissions. At the end of the whole show, the Great King, in Solomonic style rejected both my brother-in-law, Nana Owusu Achaw Prempeh and the contestant Nana Sarpong Safrotwie, and gave the stool to Asafoakwaa Agyei Tabi in April, 2015.

Then, as fortune dictated, you landed in your new position. Your outfit did well by dispatching your gagdets, materials and personnel to this year's Bar Conference at Koforidua, the home of Emeritus Daasebre Oti Boateng. Some lawyers took advantage of the occasion to get registered –because they know the importance of registering for a national identification card.

I insisted on seeing the boss. I was directed to a tall, handsome, young man with a ready smile on his lips, in the company of a non-descript personage: I disclosed my mission, and they directed me to a notice, which read:

I know a little about the National Identification Authority, I know its mission as: “To provide a complete value added integrated multi-sectoral and multi-purpose National Identity System through the innovative use and application of information and communication technology to facilitate the social, economic and political development of Ghana.” I know the message of the Executive Secretary which reads in part: “The Ghana Card which would be issued to every Ghanaian in Ghana and abroad and to qualified foreigners living in Ghana is state of the art and is the only identity document to be used for purposes of identification in Ghana. Hence the determination of the NIA to promote its usage.” I know and can interpret Act 950.

Good, Lawyer Seth Asante, formerly of VRA was right there, and he promptly produced his registration card and Francis Koffie (the Ashanti Bar President) … They have to sign an affidavit before a Commissioner for Oaths. As a lawyer, I am not terrified at the mention of Commissioner for Oaths. So, I asked where were the Commissioners for Oaths? And this is not there… this was left in Accra. (They complained) Wha-a-t: a national exercise of such magnitude and importance? And if I, with 25 years of public service, having served in my adopted area at Half-Assini, James Town, K.I.A., Elubo, Aflao, Tema ( as head) rising to Deputy Commissioner … cannot, with all the documents I submitted get registered, then what about my classmate, who fell out, now a palm wine tapper, without any identification whatsoever living at Hweehwee? How can he be identified? And if I, whom Yahaya Yakubu from where I do not know can identify as a “fantastic” writer in the Daily Graphic between 1998 and 2010; Daily Guide from 2010 upwards will face difficulty registering, ah, haba! I am a sexagenarian (between 60 and 69 years); very soon, I shall be a septuagenarian (70-79) and octogenarian (80-89). Don't talk about nonagenarian (90-99) to reach that age? When all my mates will have gone? I am not Robert Mugabe!

I tried to call you; my phone was ringing indicating that the line had gone through but you were not picking up the call: you must have been busy-that's the way it is. Your darling was around at the Black Tie Dinner, and she indicated that you had gone to sleep, and we know, “He that sleeps feels not the tooth –ache”.

Do you disregard President Kufour's call to add the Voter ID Cards to the list of tenable documents?

In Shakespeare's 'The Tempest', Miranda says to Prospero: “Good wombs have borne bad sons” Perhaps, unkindly, to your staff, who need to be told through the words of Angelo in 'Measure for Measure': “We must not make a scarecrow of the law, setting it up to fear the birds of prey, and let it keep one shape till custom make it their perch and not their terror”.

"It's a great time to invest in Ghana, the safest country in...
7 minutes ago