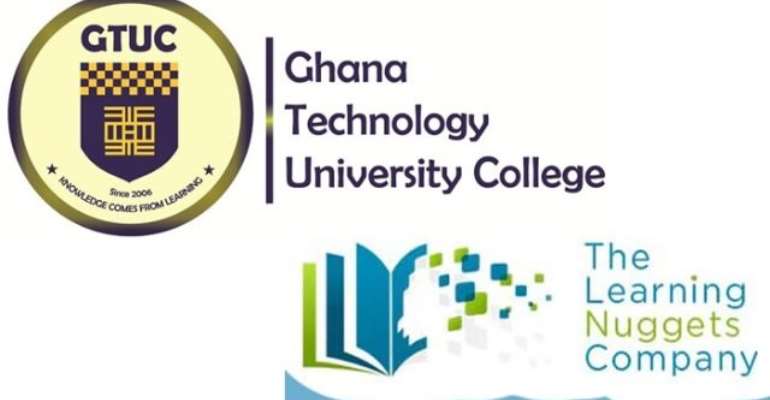 Chief Executive of Learning Nuggets Company (LNC), a digital learning service provider and one of the companies cited a Cabinet-sanctioned audit, report has denied allegations of financial malfeasance.

Diana Dwamena claims she was not contacted by SwQ Consults, the auditors contracted to look into the financials of Ghana Technology University College (GTUC).

“I am astonished that the Government of Ghana and the said consultants chose to put out a publication to the general public without taking any action to contact me personally or request information from me to confirm or refute these allegations. Is this the manner in which a supposedly respected group of seasoned professionals and politicians behave in bringing justice to citizens of the country?,” she stated in a reaction to a leaked report that alleged that six state institutions misappropriated over GH¢800 million.

The financial malfeasance that LNC was allegedly involved with was captured under the report on GTUC, one of the six state institutions audited.

The report on GTUC, for instance, stated that procurement irregularities that involved LNC were in excess of GH¢500,000 and £501, 124. 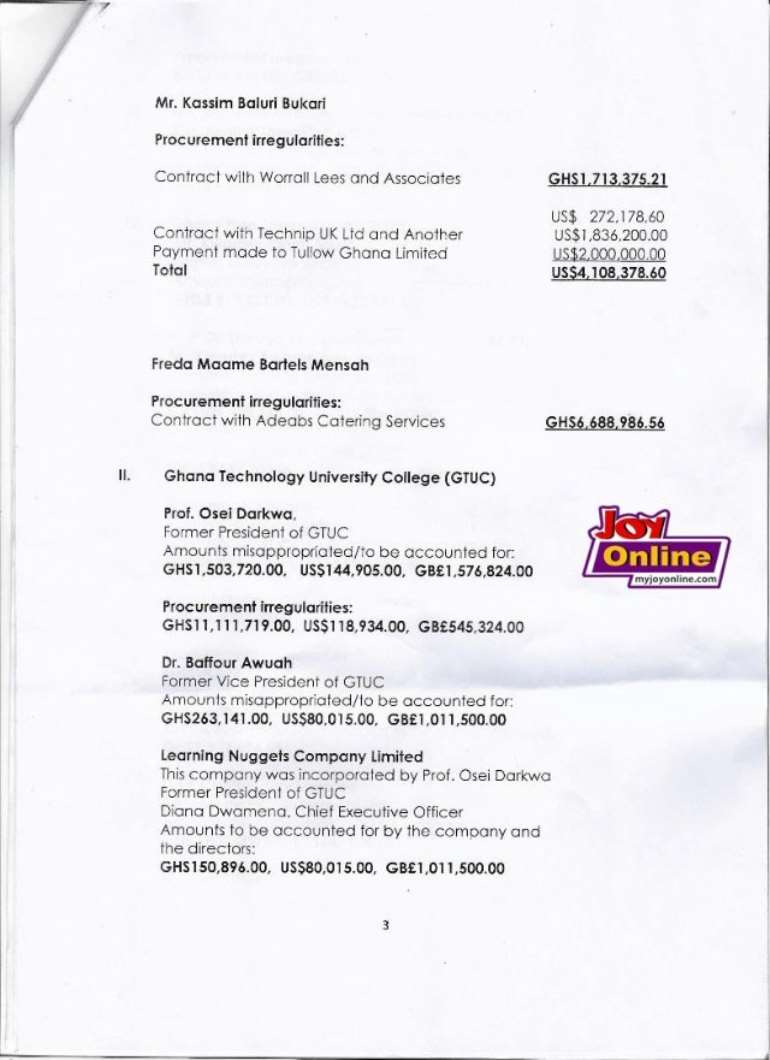 “Had a proper audit been conducted, the government would also have established that the relationship between the parties was purely formed on a commercial basis between two private entities and arose from the initial sale of LNC’s Campus Companion® tablet PCs to the university in 2011,” Diana Dwamena said in her reaction to the audit report.

Read her full reaction below.

I read an audit report from the Cabinet Committee Responsible for the Coordination of Investigations/Forensic Audits dated 31st August 2018 on 20th September 2018, in which it cited six institutions including Ghana Technology University College (GTUC), under which The Learning Nuggets Company Limited (LNC) was also named. This appeared on various social media and online news outlets. The report stated that my company and I specifically, have engaged in financial malfeasance and misappropriated government funds. An audit purported to have been conducted by CSW Consultants formed the basis of this allegation.

I am astonished that the Government of Ghana and the said consultants chose to put out a publication to the general public without taking any action to contact me personally or request information from me to confirm or refute these allegations. Is this the manner in which a supposedly respected group of seasoned professionals and politicians behave in bringing justice to citizens of the country?

It is claimed Prof. Osei Darkwa set up LNC, which is a fabrication. Where is the due diligence undertaken to establish the legitimacy of the company and the relationships between the parties? How did this allegation that Dr Osei Darkwa set up LNC arise? I am sure those on the international stage who have encountered LNC since its inception in 2005 in the UK, by me, will be much bemused by this ineptitude. Further, had a proper audit been conducted, the government would also have established that the relationship between the parties was purely formed on a commercial basis between two private entities and arose from the initial sale of LNC’s Campus Companion® tablet PCs to the university in 2011.

LNC is a digital learning service provider and in this capacity it delivered a series of products, consultancy and operational management services to GTUC’s management between 2011 and November 2017. The company was equipped to enact these engagements because it has the skills and expertise to do so. Internationally LNC and members of the organisation have advised companies as diverse as large telecommunications companies, international foundations and large NGOs and worked with bodies such as the UN Special Envoy For Education on the Global Education Platform (GEP), Global Business Coalition For Education and The Brookings Institute for learning and development and capacity building. LNC has developed proprietary technologies and processes and partnered with world-leading organisations to bring the best solutions to improve the skills and competencies of individuals, organisations and governments in its chosen markets in Sub-Saharan Africa and beyond.

I take great exception to the shoddy and unprofessional work and the accusations and lack of due diligence which could have adverse effects for our reputation with follow-on financial consequences for the company.

GTUC saw fit to benefit from LNC’s expertise and contracted legitimately in a number of commercial ventures, from acquiring products and consultancy services to subcontracting operations for Nigeria and IPMC. GTUC’s management team worked closely with LNC in the execution of the latter. As would be expected, regular management meetings were held to discuss the operations and market challenges and strategic decisions taken accordingly. Particularly in Nigeria, GTUC assisted with the setup of the infrastructure required to operate a learning centre, which was a precondition put forward by the Federal body, National University Services (NUS), before it would recognise the GTUC Nigeria operation as legitimate. The intent of the learning centre was to enable GTUC to deliver remote lectures, study clinics and student support from Ghana to Nigeria. Due to quality issues at GTUC, Coventry University (largest partner) decided to restrict all remote activities. Additionally, it reduced the number of courses under the programme from 18 to 7, a decision that took place after the initial investment, and which had a adverse impact on the entire operation and business proposition.

Furthermore, student travel which was scheduled to decrease from two trips a month to one remained at two and later increased to three. The student numbers dropped dramatically and throughout the entire programme GTUC was unable to generate the type of revenue anticipated when the initiative was conceived. Moreover, GTUC did not recoup the initial capital investments. LNC also lost money through direct loans to the GTUC programme and making up shortfalls for purchases and operational activities; amounts it intends to recoup from GTUC.

The losses made between commencement of business in Nigeria in May 2012 and 2014 were further compounded from 2015 onwards, firstly, due to the Nigerian elections, market recession and increase in oil prices. This saw prices escalate with exchange rate increases of 77% to 140%. Fees charged were paid in three tranches of 40% on acceptance, 40% after the 5th module (approximately 5 months after start) and 20% after 8 months. Students were not charged extra even when the length of their programmes extended into the subsequent year; and as such impacted by market price increases. Various price adjustments were made by GTUC which also impacted on student enrolment; resulting in lower intake e.g. September 2017, only 3.

Management’s decision to delay transfers to GTUC Accra was purely based on sustainability and the fact there was “nothing” to transfer as the initiative made a deficit throughout. GTUC’s seasoned management team took a long term view of the Nigerian market, regarding it as potentially a more lucrative market than Ghana on the basis of volumes alone. Coventry eventually agreed to increase the number of programmes, however, at the end of 2017 that objective had still not been achieved. LNC supplemented the GTUC operation at various points and is owed money, which it intends to recoup once the new GTUC management is confirmed and in situ. With regards other operational activities related to IPMC, LNC supported the initial setup and management of the programme. Again, this initiative was loss-making and LNC decided to withdraw from the venture.

It is unclear where the sums of monies quoted by the audit committee originate from. It is also absurd for the audit committee to take numbers at face value without understanding the market and operational context and the management decisions taken and to extrapolate this to mean “financial malfeasance and misappropriation of government monies”. As a subcontractor, you will also appreciate if we were working contrary to GTUC, its management would have terminated our contract.

More disturbing is the unprofessional action of broadcasting on the internet. Having worked for large international corporations in roles advising governments on the implications of not understanding the negative impact of the internet, I find it alarming to see how loosely some members of the government have chosen to engage in this manner.

If the audit committee needs further explanation of the operations and payments involved the decent thing to do is to ask and not concoct stories and present in this reckless manner for public consumption.

I hope this matter can be resolved expediently.