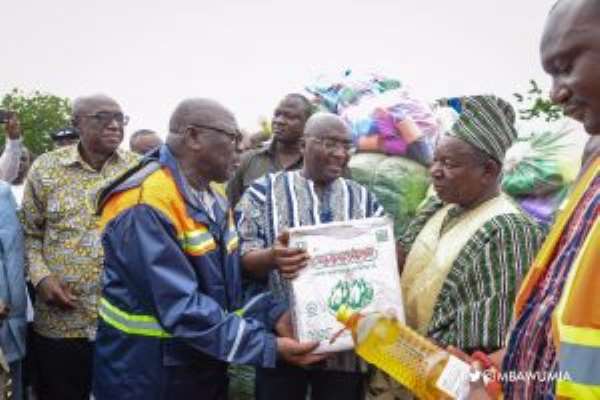 The National Disaster Management Organisation (NADMO), has suspended its Regional Stores Manager, Amin Sulemana, following the distribution of some expired food items to flood victims in the Upper West Region.

Public Relations Officer for NADMO, George Ayisi, who made this known on Eyewitness News further indicated that NADMO's Upper West Regional Director, had been queried over the incident.

The opposition National Democratic Congress (NDC), first brought the issue to the public's attention at a press conference in Wa on Tuesday.

The Upper West Regional branch of the National Disaster Management Organisation (NADMO), has since confirmed to Citi News it received complaints from some recipients who said they had fallen sick after consuming some of the food items.

Mr. Ayisi said a fact finding committee has also been set up to investigate the issue.

“We set up a fact-finding committee that will look into the issue. The Regional Director of NADMO has also been queried and his response is going to form part of the basis for the terms of reference of the fact finding committee. Also, the Stores Manager at the Regional level, Amin Sulemana, has been suspended until the committee's work is concluded. The Committee will be given two weeks to do their work,” said Mr. Ayisi.

Items not purchased by Bawumia
Earlier reports had suggested that the Vice President supplied these items.

Speaking to Citi News, Northern Regional NADMO Coordinator, Isaac Seidu, said subsequent investigations by his office established that some of the food items which formed part of the supplies from the Vice President had indeed expired.

At the press conference held in Wa, the Upper West Regional Communications Officer of the NDC, Prosper Puo-Ire, flanked by some regional executives, said “after several complaints from some of the victims, we noticed with shock and dismay, right after the donation that the items were expired products given to them”.

He added that “today, the love for kingly power and it's associated glamour has blinded Dr. Bawumia to our plight and further hardened his heart to the extent that he serves our people with expired food items at their times of vulnerability and sincere need”.

NADMO later in a statement issued on Tuesday however refuted reports indicating that the items were from the Vice President, saying “all items distributed to the three Northern Regions were not purchased by the Vice President's office, but were all supplied from the NADMO.

“NADMO takes full responsibility for the said mistakes, and assures the general public that no such unfortunate incident will recur, “the statement added.