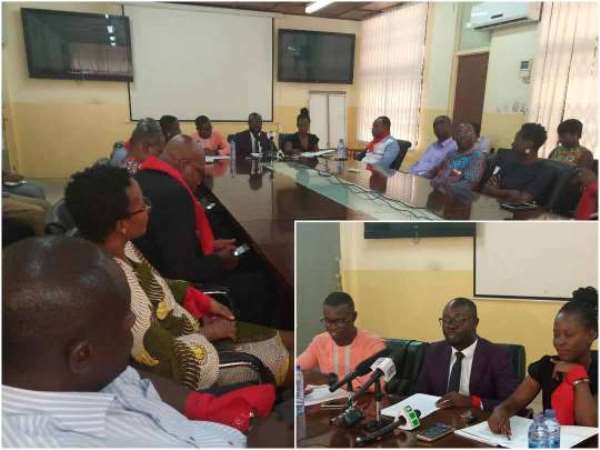 Lecturers at the Ghana Technology University College (GTUC) have embarked on an indefinite strike to drive home their demand for a new Governing Council and the passage of the GTUC Bill into law.

The indefinite strike action covers withdrawal of all academic services such as teaching, thesis supervision, consultations and academic counselling services.

It also involves attendance to all faculty meetings and University gatherings as well as issuance of reference letters to students and alumni of the University.

Speaking at a press conference on Tuesday in Accra, Mr Samuel Kingsford Seglah, Chairman, GTUC Lecturers Association, said the action would remain in force until Government constituted a governing council for the University and submitted the GTUC Bill to Parliament for passage, while ending the reign of the Interim Management Team (IMT).

He said the strike action was taking place on all GTUC Campuses in Accra, Takoradi, Kumasi, Koforidua and Ho.

Mr Seglah said over a year ago (20th July 2017), the GTUC Lecturers Association sent a petition that called for the Government's intervention in the running of the University, because they suspected financial malfeasance and defective governance in the University.

He said in the petition they also called for a forensic audit based on their suspicion of the financial mismanagement of the University.

"Just a few days ago, we read in the media reports, aspects of the audit report in which huge sums of monies were alleged to have been misappropriated or embezzled," he said.

"This vindicates the position of the faculty at the time we petitioned the President of the land," he added.

Mr Seglah said following their call for the Government's intervention, the then President of GTUC, Prof Osei Darkwa was removed from office by the Government through the Minister of Communications, Mrs Ursula Owusu Ekuful.

He said after the removal of Prof Darkwa from office, a three-member Interim Management Team (IMT) was put in place on 2nd October 2017 to temporarily steer the affairs of GTUC pending the appointment of a governing council and new President or Vice Chancellor.

He noted that the IMT had been in office for one year and the University had been without a Governing Council since January 2017.

Mr Seglah said, in addition, the Ghana Technology University Bill had taken too long to be passed by Parliament; declaring that these three issues were the focus of their strike action.

He emphasised that the absence of a Governing Council had adversely affected the running of the University.

He said for instance, certain promotions and key appointments have been pending for more than a year.

The President said staff salaries had not seen any upward adjustment since 2014 and some important policies had not been approved for implementation.

He noted that the University had some non-performing assets that could be disposed off to settle part of their indebtedness but without a Council, such decisions could not be taken.

He said the appointment of a new President/Vice Chancellor for instance, was a function of the University Council.

Mr Seglah said the appointment and inauguration of a well constituted Governing Council was therefore, urgent for the smooth running of the University.

"We are calling on government to as a matter of urgency, constitute and inaugurate the University Council immediately else faculty will not return to the lecture hall," the Chairman said.

"We commend the government for initiating processing that will eventually lead to GTUC becoming a full public university," he added.

He said the absence of the legal framework for the governance of GTUC was worrying.

"Faculty is concerned that the GTUC Bill, which when passed, will make GTUC a hill public university with legitimacy," he said.

"We call on government and Parliament to as a matter of importance, expedite action on the passage of the GTUC Bill."

He said the IMT so far had not given them any strategic direction since they took office; adding that all their decisions had been adhoc in nature.

He said careful analysis of the IMT'S reign reveals a lot of infractions that needed to be quickly addressed.

Mr Seglah noted that this was also due to the fact that the IMC lacked locus as the University was currently without a Governing Council to ratify some of these decisions.

He said it was the view of faculty that they could not continue to run the University with an interim management.

"We want the IMT dissolved NOW and a substantive management put in place," he said.

"We believe that the appointment of a Governing Council and the passage of the GTUC Bill will help address these challenges as soon as possible."