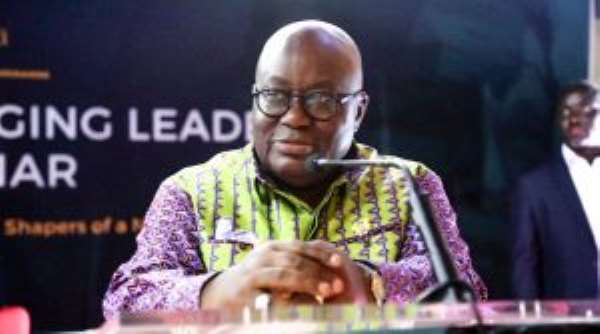 President Nana Akufo-Addo has said he expects the country to be firmly handle the current economic difficulties.

Though the President said the country was not at a crisis point, he acknowledged that the average Ghanaian was in difficulty.

President Akufo-Addo stated that the difficult economic conditions “require some degree of fortitude and firm action, and that is what we are trying to do at home.”

In the past few weeks, the price of fuel and the depreciation of the cedi have become major topic discussions, as some banks were selling a dollar for GHc4.67, while some forex bureaux were selling at as high as GHc5 to a dollar.

Fuel prices also went as high as GHc5 per litre, with observers attributing the rise to the weakening cedi.

President Nana Akufo-Addo noted that, these “dramatic increases” in crude oil prices were unplanned for and straining the budget.

“You can imagine the pressures that in itself has brought on the budget; that $20 dollar increase in crude oil prices.”

“The dollar has also strengthened considerably leading to a rapid depreciation of our cedi which the Bank of Ghana is now having to fight,” he added.

President Akufo-Addo stated that government’s vision for industrialization remains a solution to some of these difficulties.

He said the country needed to expand its “supply base; expanding our capacity to export not just crude and raw materials, but to expand industrial activity. That is why the programme of rural industrialization is going to come into play and be of major transformative impact when it is fully embarked on.”

Economy is in good hands; we're steering it well – Bawumia

The Vice President, Dr. Mahamudu Bawumia, recently said Ghana's economy was in good hands , and it is being steered in the right direction for growth.

He thus advised Ghanaians to ignore naysayers who believe the economy is on a downward trend instead.

“Be reassured that this economy is in good hands. We are not where we want to be, but we believe that we are on course. But as all good sailors know, rough and turbulent seas are no indication that you are not steering well,” he said.

'US dollar getting stronger against cedi; but our economy is growing' – Bawumia

The Vice President also allayed fears that Ghana's economy could crumble as a result of the gradual depreciation of the cedi against the US dollar.

According to him, the US dollar was getting stronger , hence the cedi’s depreciation, which is even at a lower rate than the depreciation at the time of the NDC.

Some economists, members of the opposition National Democratic Congress (NDC) and many Ghanaians, have criticized government for failing to fix the cedi's fall, and also deal with its general impact on the larger economy.

But Dr. Bawumia largely blamed the cedi's depreciation on the strength of the US dollar, saying other currencies like the pounds were also struggling against the US dollar.

He said the NDC lacks the moral authority to accuse the NPP government of delaying in fixing the “Tattered economy” they inherited from them.