Ethiopia: Mobile Internet Cut In The Capital Amid Clashes And Protests 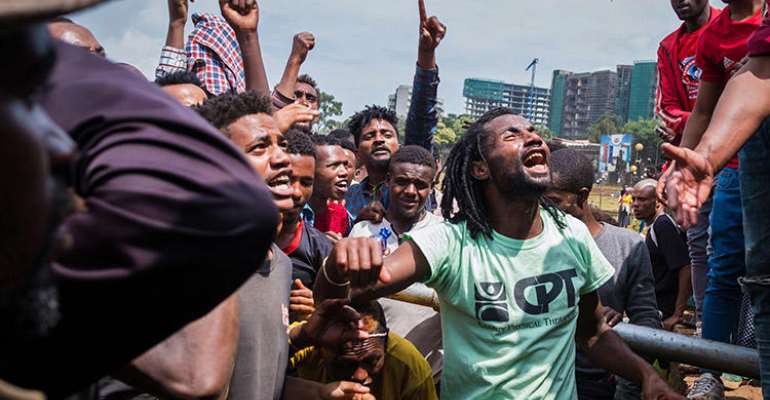 Nairobi, September 21, 2018--The Committee to Protect Journalists today urged Ethiopian authorities to ensure internet is available, including during times of unrest when access to information provided by journalists is crucial. Mobile internet was unavailable in the capital Addis Abba, from September 17 to the morning of September 19 amid protests and clashes, according to media reports and Berhan Taye, who leads Access Now's #KeepItOn campaign against internet shutdowns, which CPJ is part of.

Berhan told CPJ on September 18 that she was able to verify access to the internet had been cut by analyzing traffic data and speaking with about 20 people across the city. Ethiopian authorities did not to respond to CPJ's questions about whether they ordered access to be cut.

The shutdown came the same day as protests in Addis Ababa over clashes in which ethnic minorities were targeted, according to these same media reports and Atnafu Berhane, an Addis-based journalist who spoke with CPJ.

"Restricting access to the internet stifles press freedom by making it difficult for journalists to communicate with sources, to distribute news, and to verify information. It cuts off members of the public from the critical information they need to make decisions during times of crisis," said CPJ Sub-Saharan Africa representative Muthoki Mumo. "We urge Ethiopian authorities to keep to the path of greater press freedom forged in recent months, and to desist from future shutdowns."

Berhan told CPJ that residents who use fixed lines to access the internet could still go online. However, many Ethiopians rely on mobile technology to access the internet, and Berhan said that the shutdown made it harder for journalists to verify what was happening and for citizens to access information on safety. Belay Manaye, an Ethiopian journalist and blogger, told CPJ he believes that the protests in Addis Ababa would have better covered had mobile internet been available.

CPJ's calls and messages to the communication affairs minister, Ahmed Shide, and ministry spokesperson, Mohamed Seid, went unanswered on September 19. Fitsum Arega, the prime minister's chief of staff, told CPJ on September 19 that mobile data was back on in Addis Ababa, but when asked what led to it being cut he referred CPJ to the state-owned phone telecommunications company Ethio Telecom, for an explanation.

When CPJ called Ethio Telecom's internet-listed phone numbers, an individual who answered said that there had been a "problem" with the internet on those dates. When CPJ asked to be transferred to an official spokesperson who could elaborate, the individual said that they did not know the appropriate person to respond. CPJ's September 20 email to Ethio Telecom spokesperson Abdurahim Ahmed was not answered. Abdurahim could also not be reached on his mobile phone and a text message to the same line went unanswered.

The shutdown came amid protests in Addis Ababa on September 17 over clashes that had left at least 23 people dead in the capital's outskirts, according to media reports. Amnesty International said in a September 17 statement that at least 58 people had been killed in the clashes, including five people shot dead as police dispersed protesters. The Amnesty report and Behran both said that "hate speech" had been observed on social media during the clashes.