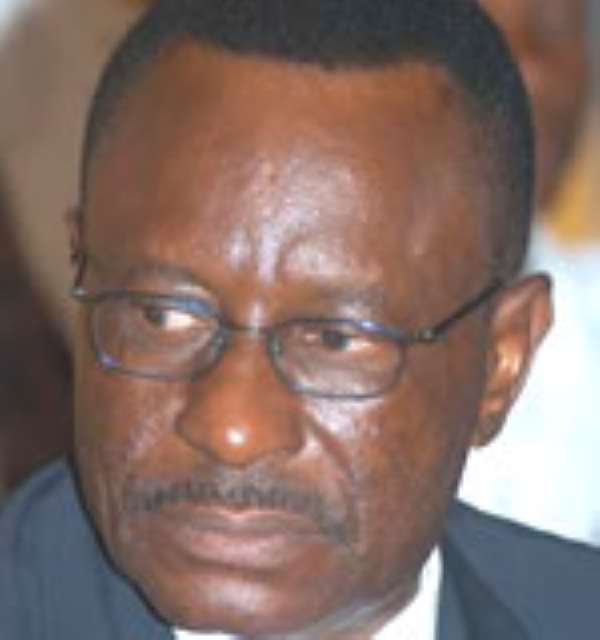 .... For Growing indiscipline in the city THE MAYOR of Accra, Hon. Stanley Nii Agyiri Blankson, has taken a swipe at the ex-leaders of the country accusing them of bequeathing to the nation a legacy of growing indiscipline, which he said is currently threatening to tear apart the national fabric.

According to him, despite the concerted efforts by both the President, Mr. John Agyekum Kufuor and his Vice, Alhaji Aliu Mahama to launch a crusade to stem the phenomenon, all indications prove that the menace of indiscipline still persists, but was quick to attribute it to what he described as 'shadowy leadership' whose hallmark was to foment a culture of indiscipline.

“His Excellency the Vice President is actually leading a national crusade to fight the phenomenon, yet the green-eyed monster of indiscipline continues to rear its head at every turn and in all aspects of our national life. Brazen indiscipline inherited from several years of some shadowy leadership whose hallmark was fomenting a culture of indiscipline and which regretfully has become an accepted norm till today.”

Delivering an address at the opening of the 14th Biennial National Delegates Conference of the National Association of Local Authorities of Ghana (NALAG) at the Institute of Local Government Studies in Accra yesterday, Hon. Blankson, noted that against the backdrop of the menace, the AMA, has enormous capacity to dislodge the mincing societal threat.

Pointing out that indiscipline manifests in hundred different form, the AMA boss indicated that the AMA will not allow the excellent image created by the President Kufuor-led administration across the globe to be tarnished by continual and deliberate attitudinal malaise.

“Much as government is committed to administration with a human face, it is my conviction that the time has come to draw the line somewhere, for the perpetrators of wrongdoing continue to grow bolder by day, because Kufuor's administration has released an unfettered freedom of speech and an unparalleled liberal democratic dispensation, which should make Ghana very investment friendly.”

Mr. Blankson, who referred to Ghana's golden jubilee anniversary 17 months time, was of the view that Ghanaians are poised to showcase to the world the achievements of the nation, but not to open its chest of filth and squalor.

Expressing disgust at the conduct of the hawkers, he said, “Hazards developments that threaten to mar the beauty and orderly progress of our structures and in the kind of mounting deluge that hawkers and petty traders have unleashed on the city of Accra and no doubt in other metropolitan and municipal areas, leaving in its trail filth and squalor.”

Mr. Blankson, not enthused further by the activities of hawkers, asked, “For how long are we going to tolerate the situation that allows mushrooming petty traders to take over the walkways and pavements so that pedestrians are forced onto the roads to compete for space with passing vehicles at the risk of life and limb? For how long can we allow hawkers to look city authorities in the face and boldly refuse to move to areas designated for the sort of trading activities they engage in?”

On his part the Minister for Local Government, Mr. Charles Bintim, stated that the government, through the ministry of Local Government recognizes that since the inception of the sub structure system, their performance has not been to the level as expected, due to some operational and structural issues.

He urged the District Chief Executives and the assembly members to provide service of desired quality to their constituents, since it was their mandate.

“If you are to be successful, you must raise funds sufficient to meet the demands of these services and government, we are committed and want you also to ensure that the sub-structure system, especially the inaugurated one performed creditably as well as know that they ensure grassroot representation of the people, by bringing governance to their doorsteps.”

He continued, “Again, if efficiently managed, the sub-structure is therefore the safest tool to be used as an instrument of mobilization and community participation for the development of their areas.”

Delivering the key note address on his behalf by his Deputy, Hon. Kofi Poku-Adusei, the Minister averred that the government has put in place mechanism to raise the district Assemblies common fund from its rate of 5% of total national tax revenue to 7.5% and the implementation aspects of this policy was to be fine-tuned.

On the performance of the assemblies, he said the district assemblies must accept the blame for not doing enough to collect the internally-generated revenue due them, adding that with modern world information communication technology, the whole world was made available to be exploited by the smart and well-intentioned.

The Acting President of Ga Traditional Council, Nii Adotey Obour, chaired the function. He charged the DCEs to live up to expectation.