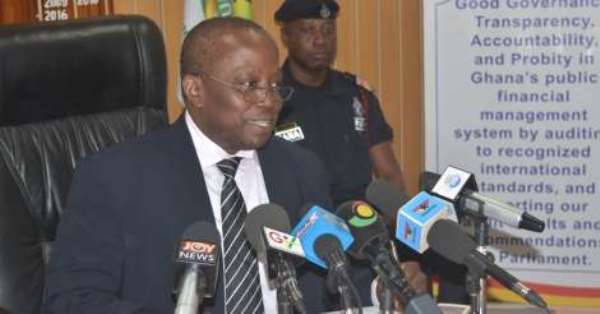 The Auditor General Daniel Demelovo has said that the Special Prosecutor cannot work effectively because of the circumstances he finds himself in.

He was speaking at the third memorial lecture of a former Finance Minister Kwadwo Baah Wiredu.

'Our collaboration I believe can bring about the deterrence that we require in the public sector, but I want to submit that the Special Prosecutor is not sitting well at all. There is no way he can be effective where he is seated.'

'I want to invite all of you to visit him but I won't tell you why. Go and visit him and you would see whether you can be effective with only one secretary with no investigator and prosecutor, nothing,' he added.

Despite the challenges Mr Amidu is facing as Special Prosecutor, Mr Domelovo said he is ready and willing to work with him in the fight against corruption.

In a related development, the Commissioner for Human Rights And Administrative Justice (CHRAJ) Joseph Whittal also said the office of the Special Prosecutor must be staffed and equipped to deliver on its mandate.

Their comments are coming at a time when most Ghanaians are questioning what Martin Amidu is doing as Special Prosecutor. Most people argue that as a citizen vigilante he did his best to fight corruption and they are therefore expecting more from him as SP.

However, he does not seem to be meeting the expectations of the general public after most people applauded President Akufo-Addo for appointing a man like him.