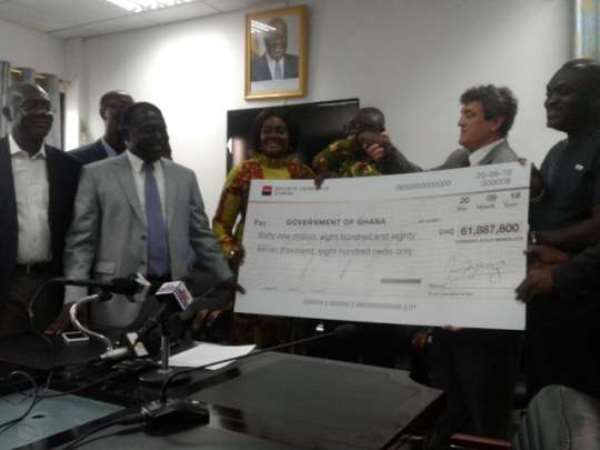 Government, on Thursday, received 13 million dollars (GH¢61.9 million) in dividends, as its 10 per cent carried interest in the Chirano Gold Mines Limited (CGML), a subsidiary of Kinkross Chirano, for the 2017 fiscal year.

Mr Adriano Sobreira, the Vice President of the CGML, who doubles as the General Manager of the Company, presented the cheque to Mr Kwaku Asoma Cheremeh, the Minister of Lands and Natural Resources, at a brief ceremony in Accra.

Mr Sobreira said the payment of the dividends was approved by the Board of the CGML, based on its operational performance for the year under review.

He said the payment of the dividends demonstrated the Company's capacity to create and deliver value for its shareholders, the host country and local communities.

'This dividend represents only part of the significant contributions Kinkross has made to the local communities and the development of the Ghanaian economy with more than $1.8 billion being spent in the country since 2011,'he pointed out.

The Company, which operates in the Bibiani-Ahwiaso-Bekwai District of the Western Region, also contributed about $400 million to the national economy through the payment of taxes and royalties to government from 2011 to 2017.

It paid a total of $257 million in wages and salaries within six-years, to employees of whom 98 per cent are Ghanaians.

'The Company has also provided numerous business opportunities to local contractors, with nearly $1.2 billion being spent on goods and services with local companies since 2011; while 73 per cent of all procurement done in 2017 was done in the country,' Mr Sobreira stated.

In addition to its fiscal and economic contribution to the development of the country, he said, the Company supported various social intervention programmes in the areas of health and education, thus impacting more than 212,000 beneficiaries in its operational areas in 2017.

It spent $12 million towards the provision of medical equipment for hospitals and health centres, construction of clinics and schools, as well as in training more than 300 youth in employable skills.

Mr Asoma Cheremeh, on his part, lauded the CGML for the yeoman's job, and urged other companies operating in the country to earnestly and honestly pay their dividends in accordance with the laws and agreement entered into with the government.

He referred to the Auditor-General's report on Public Accounts on Consolidated Funds for 2014, which revealed that only four out of the 22 mining firms operating in Ghana paid dividends to the Government from 2005 to 2014.

Mr Suleman Koney, the Chief Executive Officer of the Ghana Chamber of Mines, entreated the mining firms to fulfil the agreements they entered into with the Government and the country at large, saying that, mining firms were supposed to be partners in the national development efforts.