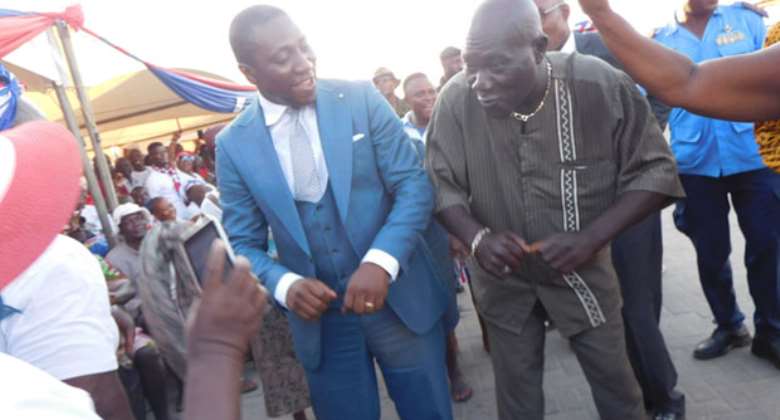 Afenyo-Markin dancing to traditional ‘Omp’ music at the durbar

President Akufo-Addo has said he is open to constructive criticisms that will help move the country in the right direction.

He said he would always welcome constructive criticisms especially from traditional rulers and experts so that the economy would be transformed for all Ghanaians to benefit.

According to the president, he would need the support of every Ghanaian in rebuilding the country; he called for unity among Ghanaians.

President Akufo-Addo made the call on Monday at a grand durbar of chiefs and people of Winneba to round off his four-day tour of the Central Region.

He stressed: “It is not possible that we will all belong to one political party so we must be one in supporting every government in power. It is my wish that greater majority of Ghanaians will belong to the New Patriotic Party (NPP) and buy into the vision of the party to bring prosperity to Ghanaians by strengthening and growing the private sector”.

The president told the chiefs and people that among all the political parties in Ghana, the NPP has the best socio-economic policies to improve the living standard of the people.

“When I promised to introduce the free SHS policy, a lot of people, mainly our political opponents, doubted my sincerity,” he said, adding “I felt so much pain and bad about it”.

According to him, the free SHS has now become a reality under his leadership and is here to stay to benefit all Ghanaians. He assured the people of Winneba of their fair share of the national cake.

The Member of Parliament for Effutu, Alex Afenyo-Markin, who stole the show at the durbar by openly dancing to Asafo songs and traditional ‘Ompe’ music, told his people to support the NPP government to bring the needed development to Effutu and the nation as a whole.

He said President Akufo-Addo was the only hope for the country especially the youth, for which reason they must continue to rally behind him to implement all the noble and pragmatic policies for the youth of the country.

He said he would continue to fight for the Effutu constituency for jobs to be created for the youth of the area as far as he remains the MP for the area, adding that the chiefs and the people of Effutu must unite in supporting him to ably represent them in parliament and bring the needed development to the constituency.