Being Afraid Of Another Defeat! 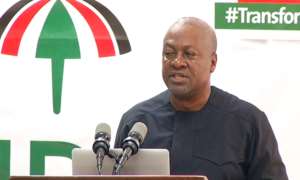 “Turning and turning in the widening gyre

The falcon cannot hear the falconer Things fall apart, the centre cannot hold, Mere anarchy is loosed upon the world” – The Second Coming

In life, few people can bear the pain of defeat. That is why the vanquisher needs consolation. A typical example is Mr. John Mahama (JM), who lost the 2016 election so miserably. In his desperation, he has not come into reality that a new captain has taken control of the 'ship of state' which was in troubled waters. The leadership of his party – National Democratic Congress (NDC) – continues to tickle themselves and also do not hesitate to tell their supporters that the party will come back to power in 2020. That assertion to me is fantasy if not wishful thinking.

It is good they are encouraging their supporters because some of them can kill themselves by drinking poison. It was a very painful defeat because the party did everything possible to win the 2016 general elections, but only God knew why they lost so badly. They had the money, logistics, manpower, strong 'macho' men and the backing of the Ghana Police Service. After bullying and insults failed, their last hope was to hack the computers which transmitted the results to the headquarters of the EC. When candidate JM went to Kumasi to campaign, he pointed his finger to the sky, where the Omniscience God dwells while alighting from Ghana's “Dade Anoma”, indicating that only God ordains kings. And when God ordained Nana Akufo-Addo, JM started growing lean.

I am one person who has continuously refused to rejoice over the defeat of someone who has the funny feeling that he or she will be the winner in a race which is yet to commence. I rather pity such persons because they fail to recognize the fact that only the all-knowing God knows the end results of everything. Chiefs, queen mothers, men of God, soothsayers, mallams and the common man on the street who had their share of the booty were quick to tell JM that he would be ordained by God to continue the looting spree. At a point in time, he became swollen-headed and started insulting Ghanaians in the following manner: “As for the Asantes, they are so ungrateful that even if you tar the streets of Kumasi with gold, they will still forever be ungrateful to you”. “Kyebi is the headquarters of Galamsey”, “The NPP is divided so if Ghanaians vote for the party, they will regret since the party could not put its house together”.

Anytime he contracted verbal diarrhea, he would use words like 'baloney', 'foolish', 'stupid', 'we will use bulldozers instead of a sledge hammer to crush Kennedy Agyapong', 'nonsense', 'Ghanaians are shortsighted' etc.

It is not for nothing that the sages say if you throw a ball against the wall, it comes back to you. Today, JM has declared his intention to run for the party's presidential primaries and see how he is being taken to the cleaners by his own people. Some of his own people say he is an 'empty juggernaut', others say he is a 'spent force'; while those with acidic mouths say he is a total disgrace and failure to the party. Senior members of the NDC who played key roles in the formation of the NDC are calling him to abandon his ambition but the man will not listen. Those who benefitted hugely during his 'create, loot and share' regime are urging him to contest and he seems to agree with these people who have been described by the founder of the party as 'thieves' and 'babies with sharp teeth'.

I am very happy the communicators of the NPP have kept away from the issue as to whether JM will run for the presidency or not. These people are right because if Hearts and Kotoko have a match, it is not for Kotoko to tell Hearts who should be the team's goalkeeper. The sages were wrong when they said one good turn deserves another without saying one bad turn also deserves another. They were charitable with the naked truth. If the NDC delegates make the mistake and push JM into the arena, the man will regret the day he was born. What the NDC did to candidate Akufo-Addo when he contested with Mahama and Mills will surely be replicated. Yours sincerely will spend hundreds of gallons of ink to take the man to the cleaners like the way the “Montie Three” did to Nana.

Yours sincerely will spend precious time in his cupboard to bring out the numerous skeletons packed there. In fact, if Mahama thinks we cannot bite like the way the 'Montie Three' did he should come and look at our teeth. I have already started building the dossier of Mr. Mahama and when the appointed time comes, the man will know that we all have red saliva in our mouths but we decide to spit out the white one because of the peace that we want. Yes, when the appointed time comes, Mr. Mahama will have no defence but to go to court and when the court jails anyone because the person insulted Mahama, precedence is there for judges to use to release the person if he is even found culpable. Nana Akufo-Addo, a lawyer of international repute, will look into the constitution like Mr. Mahama did to release the 'Montie Three', and surely people will be ready to append their signatures for the president to set free anyone who insults Mahama.

The Parable Of Ken Dzirasa And The NDC Toddlers

“When I said it will be difficult to market John Mahama, some of the young boys took me to the cleaners; they described me and other members of the party as belonging to the evil cult. They go about insulting everybody; I know they will take me to the cleaners again. In 1993, when we were working hard for the party, I believe some of them were toddlers; some of them could be grandchildren of the elders in the party” – Ken Dzirasa, former deputy speaker of parliament.

Elders of the NDC who are still alive and kicking are uncountable, for which reason I will not get enough space to name all of them. The rest have all been pushed to the background as if they don't matter in the scheme of things and in their places we have boys and girls who never landed any job after their education, until they entered politics to grab money and amass wealth. These are the boys Mr. Dzirasa is referring to. Mr. Mahama has surrounded himself with these boys who tell him only the good things about him. Mahama is like the king who was praised to the high heavens to the extent that when he was dancing naked in public, his subjects kept clapping for him to go on dancing

As for the cadres of the 31st December Revolution, I pity them a lot. Thirty seven years ago, the likes of Okudjeto Ablakwa, Agyenim Boateng, Kofi Adams, Felix Kwakye Ofosu, Baba Jamal, Sam George and the rest were toddlers as Ken Dzirasa said, but today they are riding high while the cadres who did put their noses on the grindstone are living in abject poverty. These toddlers will not even touch the old and helpless cadres with a long stick. In fact, they pretend not to know that once upon a time these cadres were the people who risked their lives to sustain the revolution which gave birth to the NDC. When the going was tough and the tough kept going, where were these boys? Because the cadres spent all their youthful years revolutionizing, they missed the opportunity to educate themselves. Poor folks! Those who dared not look at their faces in the revolutionary days have come out as men with pride. That is how life is! Excuse me while I refill my fountain pen with 'lion ink', for the battle continues unabated!!!