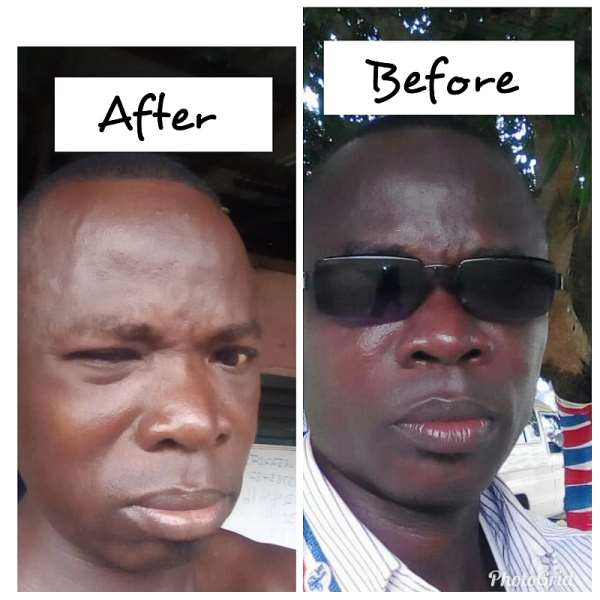 Two Police Officers of the Esiama Divisional Police in the Ellembelle District of the Western Region have allegedly assaulted a former NPP First Vice Chairman of the area for challenging them of allegedly demanding bribe from drivers.

Narrating the incident to the media, Mr. Michael Mensah said he saw two police officers standing by the roadside checking documents of some drivers who were plying the road in front of the District Divisional Police Station at Esiama.

He said, "It all started when we were returning from a funeral at KIKAM. I saw three of our colleagues standing by the roadside where two Police Officers by name constable Ibrahim Abdulai and Sergeant Joel Akobere were checking documents of drivers and cars plying the road in front of the District Divisional Police Station at Esiama".

He continued, "I alighted from our car to inquire about why they are standing there. I was told that the driver of the car was driving without licence so the car has been detained at the police station".

He added, "The driver at that time called for his driving license to be brought from his house only for the police to say he was driving above the required speed limit".

He, however, said "We pleaded for about three hours whilst Other cars were passing to no avail. At a certain point, one Toyota Rav4 was stopped and charged for overspeeding and Sergeant Joel Akobere approached the car and demanded something from the driver".

"After taking 200 Ghana Cedis from the driver, he signaled for the car to go. It was then that I approached the sergeant and said that what he is doing is a DISGRACE TO THE POLICE SERVICE so he should stop", he alleged.

Mr. Mensah said, "The Constable became annoyed and said who are you to tell us that. I responded that I am citizen of Ghana so I have the right to tell him not to take the bribe".

He added, 'This angered them as they subjected me to slaps and the use of the SHOCKER to torture me. They then dragged me to police cells and undressed me whilst they continue with the torturing using all manner of weapons at their disposal to the surprise of my friends who were screaming for them to stop".

He later thrown into the cells for about five hours detention and took the timely intervention of the NPP Ellembelle Constituency Chairman, Mr. Samuel Akainyah to release him.

"I was then thrown in to the cells for about 5 hours before the intervention of our Constituency Chairman for me to be released without any charges", he counted.

According to him, the police refused to give him medical forms to go to hospital for treatment.

He, therefore, appealed to the IGP and Interior Minister for as a matter of urgency investigate the incident and punish these police officers and also promised to make himself available for investigations.

According to him, the two police officers never assaulted him and also detained him as been reported by him to the media.

He added that his men were only on the roadside for 'Motor Check' and never took bribe from any driver.

Mr. Bayor revealed to GhanaWeb that his men only questioned the former chairman of why he was interfering in their work and didn't beat him.