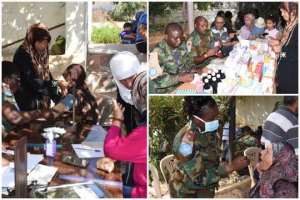 The Ghana Battalion (GHANBATT) in Lebanon, as part of its humanitarian assistance to civilians, has organised free medical and dental care for some residents of Marwahin, a town in South Lebanon.

The outreach was to assist the local populace with some medical care and to strengthen the relationship between the residents and the battalion.

Mr Salen Ghannam, the Muktar of Marwahin, said most of the residents had to travel all long distances to Tyre and other neighbouring towns just for medical care.

He said the distance to medical facilities in the area was a persistent challenge over the years and expressed gratitude to GHANBATT's continuous medical support to the community.

Mr Ghannam said the kind gesture would go a long way to cement the existing relationship between the community and the United Nations Interim Force in Lebanon (UNIFIL).

He said the team was able to treat close to forty Lebanese and some Syrian refuges with the oldest person being around 90 years and a seven months old baby.

Maj Oppong said the Medical Outreach team provided free consultation, dental care and medications for all the ailments that were presented, adding that, most of the patients expressed satisfaction with the level of care provided by the team.

The Ghana Battalion, with the nucleus being the 64th Infantry Regiment of the Ghana Army, made up of 850 All Ranks, was deployed in Lebanon in July 2018 for a one-year peacekeeping duty.