All Set For Kofi Annan Burial At Burman Camp 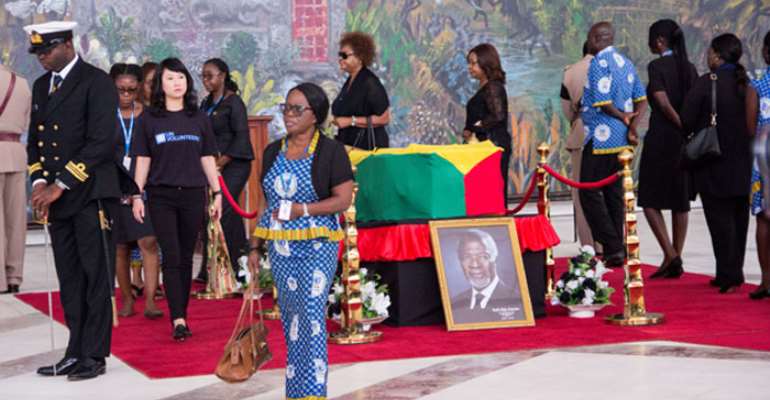 Some mourners filling pass the remains of Kofi Annan

All is set for the interment of the late Kofi Annan, former UN Secretary General, at the new military cemetery on the outskirts of Burma Camp close to the Airport Hills and Chain Homes housing former President John Mahama.

Soldiers from the Field Engineer Regiment of the Ghana Army are working around the clock to make Thursday's event successful.

They have erected the tombstone and planted green grass, among others.

The newly commissioned cemetery witnessed flurry of activities, as senior officers drove in and out to assess progress of work ahead of Mr Annan's burial.

At the time DAILY GUIDE visited the location to observe preparations toward the burial ceremony, men of the regiment and their civilian counterparts were seen working assiduously.

The former UN Chief would expectedly be interred at the VVIP segment of the cemetery; a location which contains the mortal remains of former Vice President Paa Kwesi Amissah-Arthur and former Senior Minister J.H. Mensah, who passed on recently.

The grave of the former UN Chief lies at the end of a row of graves, with three unfilled ones preceding it.

It is not clear who will be occupying those graves.

Another grave equally decorated on the VIP Wing, believed to be that of the renowned poet, Prof Atukwei Okai, has also been prepared.

Prof Okai is due to be buried on Friday at the same venue after the president had granted him a state burial.

A military officer, who pleaded anonymity, gave assurance that by the close of yesterday, a memorial plaque, one of the features of the grave, would have fixed. He added that all would be set for tomorrow's activity.

“Burial of persons at the VVIP is in the hands of the Commander-In-Chief of the Ghana Armed Forces which is the President of the land,” he said.

Continuing he said, “the military do not control this area and do not determine those to be buried here, apart from the President who determines who is to be buried at the VVIP, the Chief of Defence Staff (CDS) controls the rest.”

At 9am yesterday, five flags- three for the UN and two for Ghana- had been hoisted on the grave all flying gracefully even before the interment of the former UN Chief.

Elsewhere in the cemetery, some soldiers were busy digging graves for the interment of three retired soldiers, DAILY GUIDE learnt.

The façade of the cemetery was not left out of the facelift, as workers were seen weeding the area.

Rehearsal
When the paper contacted the Director of the Public Relations Directorate of the Ghana Armed Forces, Colonel Eric Aggrey-Quarshie, he said the final dress rehearsals for the burial was done on Monday, suggesting that the funeral party and the accompanying military protocol are all set for tomorrow.

On Monday, a detachment of officers and men from the Ghana Air Force were seen rehearsing in what definitely was the final dress rehearsal.

The accomplishment of the final dress rehearsal is an indication that the necessary drills had been conducted so that all would go according to plan on the D-Day, which is tomorrow.

Architectural Landscape
The new military cemetery situated on about 64–acre land and designed to accommodate more than 10,000 graves which would comprise military personnel, including retired personnel and their families, was opened last year

It also has a space for presidential and prominent citizens of the country titled the VVIP and VIP sections, and a place for civilians as well.

Civilians will, however, pay some money to the Ghana Armed Forces to have their loved ones buried there.

The new cemetery has been landscaped with lawns, trees, flowers, and walkways with emphasis on serenity and orderliness to match Arlington National Cemetery in the United States.

It was the initiative of the immediate-past CDS, Air Vice Marshal Michael Samson–Oje.

It has a forecourt where burial service can be organised in between the VVIP section and a section where civilians would be buried, and a walkway separating the various categories.

The former UN Chief passed away on August 18, 2018 in Switzerland after a short illness believed to be pneumonia.

His remains was laid in state at the Accra International Conference Centre for members of the public and heads of department, among others, to file past.

Yesterday marked the beginning of the three-day state funeral announced by government after the body arrived on Monday aboard a chartered flight.

The body was accompanied by his wife, Nane Maria Annan, their children, as well as grandchildren.

The last item on the programme would be the interment of the body with full military honours, featuring the 17-gun salute.