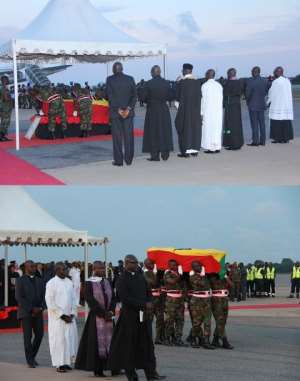 The remains of Mr Kofi Annan, former United Nations Secretary General and Nobel Peace Laureate, who passed away on August 18, 2018, arrived in Ghana on Monday, ahead of a three-day state burial.

The aircraft carrying the remains of the statesman taxied to the tarmac at the Jubilee lounge of the Kotoka International Airport, at 1728 hours, where President Nana Addo Dankwa Akufo-Addo and First lady Rebecca Akufo-Addo, received the family of Mr Annan.

Also at the airport were; the Vice President Alhaji Mahamadu Bawumia, Speaker of Parliament Prof. Aaron Mike Ocquaye, a host of ministers and other state officials, as well as members of the diplomatic corps, clad in black mourning attire, and black suits.

Traditional leaders from both Asanteman, from where Kofi Annan's father hails and Akwamufie, his matrimonial home, also came to receive their son's mortal remains, a sombre, subdued atmosphere.

The casket carrying Mr Annan's remains, draped in the colours of UN flag, was carried by military pall bearers onto the tarmac, where libation was poured and Christian prayers said to receive and prepare his body for burial.

After prayers were said, the remains brought from the aircraft to the catafalque where the UN colours draping the casket was replaced with the Ghanaian flag, signifying the transfer of the remains to the state.

After another round of prayer, the casket was then transferred from the catafalque to the hearse to be transported to the Accra International Conference Centre (AICC).

Background
Mr Annan passed away on August 18, 2018 in the Swiss capital of Berne after a brief illness. He and the UN were the co-recipients of the 2001 Nobel Peace Prize.

Born in Kumasi, he joined the UN in 1962, working for the World Health Organisation's (WHO) Office in Geneva.

He then went to serve in various capacities at the UN Headquarters including; serving as Under Secretary-General for peacekeeping from March 1992 to December 1996.

He was appointed the UN Chief in December 1996 by the Security Council and later confirmed by the General Assembly, becoming the first office holder to be elected from the UN staff itself.

As Secretary-General, he worked to reform the UN bureaucracy, combat the deadly HIV spread, especially in Africa and launched the UN Global Compact.

After serving out his term, he formed the Kofi Annan Foundation in 2007 to work on international development and was also the Chairman of 'The Elders', an international organisation founded by Nelson Mandela.

In 2012, the late Annan was the UN-Arab League Joint Special Representative for Syria, to aid efforts at resolving the bloody conflict there but quit over his frustration with the UN's lack of progress with regard to conflict resolution.

He was appointed to lead a UN Commission to investigate the Rohingya crisis in September 2016.

The late Annan studied economics at Macalester College - International Relations from the Graduate Institute Geneva and Management at the Massachusetts Institute of Technology (MIT).

He is survived by his wife Nane Marie Lagergren and their Children, Anna, Kojo and Nina.

Below are the burial arrangements for Mr Annan:
On Tuesday 11th September, between 1000hours and 1600 hours, the Ghanaian public would be given the opportunity to pay their last respects to the respected diplomat, while state dignitaries would have the chance to do so on Wednesday 12th September.

The highlight of Wednesday, he said, he said would be a delegation from the Asantehene, Otumfuo Osei Tutu II, who would perform the appropriate rituals befitting the late Mr. Annan's status as Busumuru.

The Akwamufie, where Mr. Annan is from, will also be given the opportunity to pay their respects, he said.

The burial service will be held on Thursday 13th September, from 0900 hours to 1100 hours, followed by a private burial at the military cemetery in Accra.