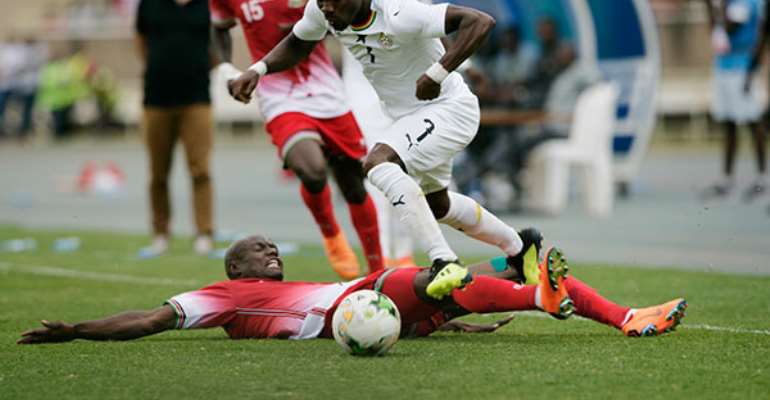 Ghana fell to a shock 1-0 defeat away to Kenya in their second Group F game of the 2019 Africa Cup of Nations qualifiers on Saturday.

Player Ratings Richard Ofori - 7.0 He had a decent game but could do nothing when Nicholas Opoku's strike zoomed past him.

Daniel Amartey - 8.0 He had a solid game at the back and at times, drove his teammates forward with some surging runs.

Andy Yiadom - 7.5 Yiadom was solid at right back and was also impressive going forward.

Daniel Opare - 5.0 Attacking-wise, his contributions were minimal and he also had a torrid time dealing with the attacks of Ochieng Ovella.

Nicholas Opoku - 6.0 His mistimed clearance found its way into the back of his own goalkeeper's net but he was generally okay.

Afriyie Acquah - 6.0 He didn't offer so much defensively and he also failed to exert his authority on the game. He missed a sitter in the second half. When it appeared rather easier to score, Acquah thought otherwise as he misplaced his header from close range with the gaping goalpost at his mercy.

Ebenezer Ofori - 5.0 He was anonymous for most parts of the game. Christian Atsu - 8.0 He was impressive and was one of Ghana's bright players in the game. He will rue the wrong offside decisions against him.

Edwin Gyasi - 5.0 He was anonymous for most aspects of the game. Thomas Partey - 9.0 Ghana's man of the match in my opinion. He had a quiet first half but he dominated the game when he was tasked by Kwesi Appiah to play in the midfield.

Majeed Waris - 8.0 He was a handful for the Kenyans as he attracted some fouls from them. Altogether, it was a decent performance.

Kwadwo Asamoah - 4.0 He was introduced late and couldn't have an impact on the game.

Harrison Afful - 4.0 He came in for Daniel Opare but just like Kwadwo Asamoah, it was too little too late.

Raphael Dwamena - 5.0 Dwamena wasted decent chances to score. He will definitely wish for a better performance in front of goal next time.