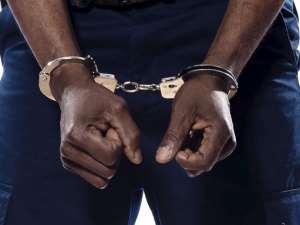 Julius Gbede, 23, alias “Bible,” said to be a notorious criminal, has been nabbed at his hideout at Agblazuime, a village on the Ghana-Togo border near Aflao.

Gbede, who has been on police wanted list since 2015, is a native of Aflao. He was picked up alongside two others – Kofi Kunya, alias Sponsor, 25, and a native of Kpoglo in the Ketu-South Municipality, and Edem Sodzi, alias Stone, 21, a Togolese resident in Lome.

Superintendent of Police in charge of the Aflao District Police Command, Frederick Lumor, who led the operation, told the GNA that in 2015, Gbede, who was involved in a robbery at Adzablikope near Aflao, escaped.

He revealed that one of his three accomplices in that robbery, who was arrested at the scene, was jailed 28 years, while Gbede lingered out there for a while before being arrested.

Mr. Lumor said Gbede, who was also put before court jumped bail, and was suspected to have engaged in series of robberies alongside one Edzordzi George Dabla, an ex-convict, who is currently on the run.

He said at about 1930 hours on Monday, August 27, this year, some passers-by spotted Gbede and some others in an isolated house in a grove at Agblazuime and laid ambush to monitor their movement.

Mr Lumor hinted that during the ambush, the passers-by spotted Edzordzi Dabla arriving there on a motorbike to drop his pillion rider and then left.

He said at about 2200 hours, the group hinted the police and a team moved in, leading to their arrest when they were preparing a meal.

He disclosed that when their rooms were searched, weapons, assorted pharmaceuticals, beverages, a flat screen TV set, which a complainant had since identified as his, a strong TV decoder and a Wi-Fi converter were discovered.

During interrogation Gbede admitted that he and Kunya and one Akakpo Torvor, now on the run, had been involved in a number of robberies in the area.

Those criminal acts included attacks on a mobile money agent on June 4, this year, in the vicinity of the Diamond Cement Company Limited (DCGL) at Aflao, where the gang took away GH¢ 6,000.

Gbede also bickered with Kunya, about who shot the victim they attacked. But the victim survived.

Again, Gbede admitted that he and Edzordzi Dabla, now on the run, on June 29 and on August 6, robbed the shop of a trader near the Aflao Police Station, taking away unspecified amount of money and other valuables.

Mr. Lumor continued: “ Gbede and Edzordzi Dabla, on the same day of August 6, this year, robbed a shop at Makavo Junction and took GH¢800, but in the process left a locally made pistol with one AA live cartridge stuck in its muzzle, which is now with the police.

“The suspect, Gbede, confessed he and the same Edzordzi Dabla broke into a pharmaceutical shop and an agro-chemical shop at Dzodze, but denied stealing anything, even though the police found some drugs with them”.

He added: “Gbede also admitted his involvement in a robbery at a house at Denu, taking away GH¢20,000”.

The Aflao District Police Commander appealed to residents to provide information on criminals and suspicious persons to help put the police ahead of the criminals.