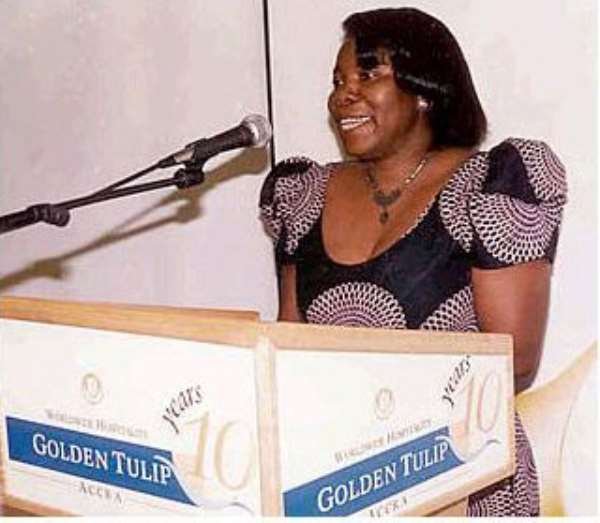 Theft of six cheques totaling ¢630,747,000 belonging to Ghana Broadcasting Corporation (GBC) which were cashed has been blamed on the negligence of the Director General, Eva Lokko and her acting Director of Finance, Kofi Kyei.According to a report from the Auditor General's Department which was intercepted by the Crusading Guide says, although the theft of the money was still under investigation, both the DG and her director of finance were to be held responsible for their negligence which led to the loss of the money.“ Our recommendations against the DG and the acting director of finance on the stolen cheques is based on our judgment of lack of due diligence on the part of the two officials in safeguarding the finances of the corporation,” the report said.The report said that during investigations some matters of grave concern were noted, “ regarding the reaction of management and Mr Kyei in particular to the cash loss.”It said “ Mr Kyei did not take any action when he received a phone call from Bank of Ghana sometime in August, 2005, following an attempt by a drawee to cash a cheque from the corporation's Subvention Account.”The report said he told a team of investigators “ he only asked the caller from the Bank to refer the cheque to drawer.”He admitted “ he erred by not taking any action on that call,”The team of investigators said the account of the earlier fraudulent withdrawals from the Subvention Account in January 2005, they “ expected Mr Kyei to have asked the caller to hand over the drawee to the police.”The report said even though Mr Kyei informed the investigators that he had handed over all the chequebooks in his custody and those in use to the Head of Treasury on August 4, 2005, “ we found that Mr Kyei passed on additional uncompleted cheque books originally handed over on August 4, 2005.The report said, “ 17 cheque leaflets had been removed, together with their stubs, from the cheque booklets.The under listed are the leaflets.Issuing bank Name of account serial no. of removed leaflets Bank of Ghana GBC subvention 336905 Account (AC No, 336909 0125660028000) 336912Bank of Ghana GBC Special 522208 Account (AC No 522223 0125660028003) Prudential Bank GBC Main 214319 Ltd Account (A/C No 214322 0000190006018) 214325 214333 979939 979942The Trust Bank GBC Main Account (A/C No.1044 000902) 411522 411523 411526 411529 411531The Trust Bank GBC VAT Account 303563 (A/C No 1480200202) It was realised that six booklets from which the 17 leaflets were removed were not part of the stock of 42 booklets handed over on August 4, 2005. Mr Kyei was said to have refused to collect monthly bank statements from the banks to reconcile payments made by the bank as a measure to identify bank errors or fraudulent withdrawals from the Corporation's bank's account. The report said “ as at October 7, 2005, the corporation's bank account statements available at the Finance Department were for periods up to June 17, 2005, adding that “ As at the same date, Mr Kyei could not produce any evidence to show that he had written to the banks not to honour any of the missing cheques reported on.”It said that “ thirty seven clear days after the Corporation received information on the cash withdrawals amounting to ¢ 669,660,000 Mr Kyei had not requested for up-to date bank statements on the accounts from which withdrawals were made to ascertain further loss any further losses not detected by the banks.”The report said on October 10, 2005 an audit check on the Trust Bank statements revealed that an amount of ¢421,280,000 was withdrawn from GBC's account without the knowledge of management.It said following the detection of the thefts of the first cheque, management decided to send payment order letters to the Banks ahead of cheque payments, but “ failed to use official letterheads of the Corporation, but rather used computer-generated memos.”The report therefore held management liable for the theft.A week ago, workers of the country's premiere broadcaster, Ghana Broadcasting Corporation (GBC) held a demonstration, led by union executives, demanding the removal of Eva Lokko and her finance director for misappropriation of the Corporation's funds.