Rawlings is merely crying wolf and should be ignored... 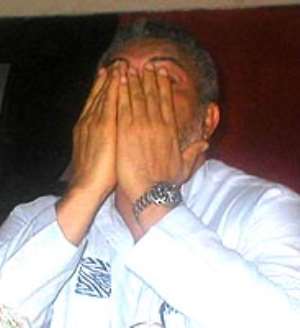 Folks, the role that inducement plays in partisan politics anywhere in the world cannot be discounted or ignored. Whether such inducement (be it material or not) amounts to bribery and corruption is up in the sky.

In our Ghanaian situation, inducement is easily noticeable wherever it occurs in any form. Over the years, our politicians have reached out to constituencies, inducing them in diverse ways for their support to hold positions. Whether such inducements come in the form of money, motor bikes, corn mill, bicycles, etc. or promises regarding employment and promotion at work, they are easily recognized and virtually accepted as an integral aspect of political mobilization.

That is why I find it difficult to understand, let alone accept what is reportedly coming from Rawlings:

"Former President, Jerry John Rawlings, is still not happy with the leadership of the party he founded, the National Democratic Congress (NDC).

This is because of the continuous ignoring of his advice by the NDC leadership not to allow money to influence their sense of judgment while seeking to recapture power in 2020 after the party’s humiliating defeat in the 2016 election...." (See https://www.ghanaweb.com/GhanaHomePage/NewsArchive/Rawlings-weeps-for-NDC-682754).

Rawlings shouldn't deceive himself that he is a saint when it comes to inducements for political support. He knows how things happened under his own watch to establish him in power. And he knows how inducements have played a huge role in the affairs of the NDC after him---and in the other political parties.

Thus, coming out to isolate whatever might have happened in the just-ended election of regional executive officers of the party to blame on "monetization" is wayward. Of course, morality flies out of the window when it comes to politics. Those who have the means will definitely have a head-start advantage. And the "means" could be in any form. Definitely, inducement cannot be ruled out. It can't be narrowed down to the NDC and portrayed as a "danger" to the party's cause as Rawlings claims.

(Does Rawlings not even know how some delegates caused confusion and demanded that they be paid their "travel and transportation" or feeding allowances before participating in the electoral process? It was in the news.).

The point is that politics is all about the use of available means to gain advantage over opponents. The political party itself seeks support from members/sympathizers, etc. to mobilize funds and materials for outreach. Those who offer such support don't do so as a "Father Christmas"; they do so because they know the implications.

Under Rawlings, a lot happened to help the NDC grow itself on the basis of such support. A clear monitoring of the situation showed how inducement worked. So was it under previous eras and so has it been to date and will be hereafter. What, then, is Rawlings' beef?

Let's turn to the other side to rake the immediate past. Freddie Blay's manouevres to procure 275 buses for the NPP's constituency branches attracted much public interest or concern. He won the contest to become the substantive Chair of the NPP. What has become of the vociferous public outcry against his kind of inducement? Nothing!!

The intricacies of inducement in politics are deep-rooted. Monetization (in Rawlings' imagination) is a necessary ingredient. Politics is all about influence-winning or influence-peddling, depending on how one sees things from an interested (not a disinterested) perspective.

Those without material means can use other forms of inducement to appeal to constituencies for support at the polls. Personal integrity is one of such an inducement. Although not qualifiable as a means for corrupting the political process, it serves its purposes; but in our Ghanaian situation, hardly do poor people with whatever overload of personal integrity make it. Poor no friend; not so?

As the Greeks say, nothing comes out of nothing. One must sow in order to reap. Who can sow without a seed in hand? And politics is all about sowing and reaping. How it is used to solve systemic problems to move Ghana forward is the ding-dong battle raging on. It won't end just because someone who knows and benefits from what inducement does for political advantage is pontificating against it.

Our own constitution even provides inducement, which motivates people to shift from their career paths to do local and national politics. If you doubt it, ask yourself why our professionals (lawyers, doctors, engineers, etc.) and just anybody (be that a chief, queenmother, civil servant, footballer, etc.) is itching to enter politics. The inducements are attractive.

Yes, the NDC has problems to tackle in the bid to re-brand itself and become more attractive than its arch rival the NPP; but this "monetization" jab doesn't cut butter. Rawlings should have known better not to go this way.

The controversial stance of Rawlings and his wife regarding the NDC is more worrisome than anything coming from them to create the unfortunate impression that the NDC is sunk in monetization to corrupt its ideals.

Rawlings cannot tell us that he is a unifier; neither can his wife. If they are truly genuine in their political standing, they should have known that whatever propelled them to power to lead their cause thus far is bigger than their personal quests. Unfortunately, they haven't been able to rise above the fray and have allowed their personal interests to dictate their steps on the political landscape.

And they aren't going anywhere as far as self-redemption is concerned. Rawlings was stripped of the title "Father-and-Founder" of the NDC; Nana Konadu lost her bid to lead the party to Election 2004 and her Vice-Chair status, which sent her into a tail spin. She broke ranks to form the National Democratic Party, did all she could to damn the NDC (to the point of claiming ownership over its logo) and what-not!!

While she went into overdrive this way, she couldn't know that the tide won't flow in her favour because without the NDC, she has no genuine political locus. The last time she had anything to say about her interests, she was reported as saying that she would return to the fold of the NDC if the party's current General Secretary (Asiedu Nketiah) vacated his post. What malarkey!!

Rawlings abstained from the NDC's electioneering campaigns at Election 2012 but the party won the polls. At Election 2016, he set himself up with the NPP, but no data can be adduced to prove that such a misalignment worked against the NDC. Factors other than Rawlings' contribution cost the NDC.

The stage is being set for Election 2020. No matter what happens, those who know what the NDC stands for will go for it. The electorate will make their voices heard, no matter how the electoral system is manipulated by those not performing but wanting to remain in power. And when the bell tolls, those who are to get out will be forced to do so. The will of the people cannot be torpedoed. Politically, a country stands to collapse or rise if it respects the will of the people (not the misguided interests of isolated politicians) in a democracy.

Rawlings has matured into a political bat: neither breaking ranks with the NDC to follow his wife and her NDP nor doing what proves that he is still firmly rooted in the NDC. He comes out with bitter criticisms just to remain in the news headlines. If he is man enough, let him get out of the NDC. He can't serve two masters, especially having now given us the clear indication of his bed-fellow relationship with the NPP under Akufo-Addo.

Can the Rawlingses truly thumb their chests to say that they are willing to die for the very cause that they initiated and which has sustained them all these decades? What do they think when they bite the finger feeding them all this while?

Folks, much to raise; but we will end it here, hoping that the latest claim by Rawlings won't be over-extended to the NDC's disadvantage. Let the Rawlingses know that the millions of Dollars that they took from Nigeria's Sani Abacha was an "inducement" for a political cause that hasn't benefited Nigeria and its people. Is there any clean conscience anymore in them? Why make the NDC their whipping boy, then?

Let me round everything up or off here to say that the Rawlings who led the revolt against the top military hierarchy (giving Ghana the Armed Forces Revolutionary Council and the PNDC after overthrowing the Hilla Liman administration in the 3rd Republic and moving on to start the 4th republic as a civilian) was a really poor man (his own stories about the "yor-ke-garri" and the cannibalization of the furniture in the helicopter of the Ghana Armed Forces for use in his living room on my mind) isn't the Rawlings who is pontificating today.

Folks, a lot exists for us to interrogate if we really want to be honest with ourselves within the context of the politics being done in our time. Too much dishonesty on display that endangers our democracy.