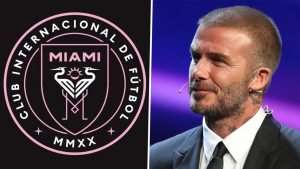 Inter Miami will make their MLS debut in 2020, after being awarded an expansion contact in January.

The crest is pink, black and white, featuring two herons and a sun with seven rays – which are a “homage” to the ex-England captain’s career.

“This is such a proud day for myself and for the entire team,” said Beckham.

The former Manchester United, Real Madrid, Paris St-Germain and AC Milan midfielder, who is team owner and president, added: “We are taking another important step in establishing our club and today marks an important moment in the history of Club Internacional de Futbol Miami.”

Managing owner Jorge Mas said: “Our city and our fans draw their strength from the dreams of a global population that calls Miami home.

“It is only fitting that our name pays tribute to the inclusiveness that makes us who we are.”

The crest appeared on the front page of Wednesday’s Miami Herald.