Globalization: intelligence and tact is required 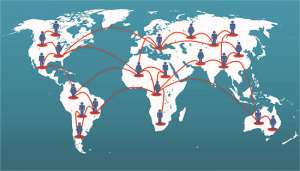 Diplomacy encapsulates modules through which sovereign states interact, with the main determinant being self-interest strategies to safeguard national interests to achieve goals within international milieu. These approaches are strategically employed to interact with other counties. In recent times, due to the deepening level of globalization and transnational activities, the states will also have to interact with non-state actors.

And for the purpose of my analysis of recent deluge of forays into Africa by leaders of the developed countries, I will focus on Sir Satow’s ‘guide to diplomatic practice’ which describes Diplomacy as “the application of intelligence and tact to the conduct of official relations between governments of independent states”.

Economic power
Unlike immediate days of the post-World War II where we had bi-polar world with America and Russia calling the shots on the global state through nuclear arms race, we now have a multi-polar world where economic power is the real determinant of power-play on the global stage. Today, though America is arguably the world’s hegemonic economic and military power, the rise of china is posing a serious challenge to this hegemony.

Today, the European nations who, hitherto, chose to close their borders with coming into effect of the common currency, have now made a quick u-turn and flocking to Africa for the following reasons:

1. uncertain about the future of European Union
2. Growing influence of China in Africa
3. Emigration
On the future of EU,the decision by United Kingdom to exit, has greatly changed the dynamics of trade relations within the Eurozone, while the sanctity of the union of Britain, comprising England,Scotland,Wales and Northern Ireland, is being threatened by devolution. It has therefore become imperative for these EU countries to explore and take advantage of Africa’s massive untapped market.

Secondly, with expansion of China’s economic power which is threatening even America’s global hegemony, the EU finds itself in a great deal of uncertainty in global geopolitics. This therefore is informing the recent wave of EU leaders to Africa.

Thirdly, the issue of emigration has become a huge source of worry to the EU countries, with mass movement of people across the Mediterranean. This has put enormous financial and logistic pressure on the EU, and in spite of measures put in place to physically patrol waters of the Mediterranean, the problem has rather worsened.

Investments
And to forestall this phenomenon, these EU leaders, on their visits to Africa, are promising to invest in the continent to create jobs for the teeming unemployed youth. So on the surface, a promise of an investment will appear to be a form of benevolence to the receiving country but in actual fact, it is rather a subtle move to solve a problem confronting the donor country.

In an interview with Ann Soi on BBC-Focus on Africa edition of Friday, 31st August, 2018, the UK Prime Minister Mrs. Theresa May said “UK has targeted to be G-7’s largest investor in Africa by 2022”. In the dynamics of globalization, this indeed tells you the foreign policy drive of the UK, not to develop Africa, but to reap maximum benefits for the people of her country. So the question is; what is Africa’s strategy to reap the maximum benefits from these intended investestmets by the UK?

Again, the announcement by German Chancellor Angela Merkel,of her country’s intension to build VW car assembly plant in Ghana, on the face value, has largely be celebrated in Ghana as a positive move. But what we seem to have lost sight of is the fact that Volkswagen is not a state-own enterprise but a non-state actor whose agenda is profit-making and therefore not here to give Ghanaians a free lunch.

Before Chancellor Merkel came to make this announcement, a careful economic analysis would have been made to ascertain every possible scenario to derive maximum profits from every dollar invested. The Germans know that vehicles assembled here in Ghana will be out of reach of ordinary people, purchasing-power-wise, but the fact that the cost of labour is notoriously low, they can still break even when these vehicles are sold on the European market.

Intelligence and tact
The argument of Sir Satow outlines two key ingredients in contemporary diplomacy, which are INTELLIGENCE and TACT. These ingredients are key, because, when it comes to the question of globalization.

Intelligence in foreign policy formulation comes to play, largely at the negotiation table, where big transnational deals are made amongst both state and non-state actors. This is where countries of the third world, particularly Africa, have always been found wanting and ended up having wrong deals due to the fact that those that often represent our interests lack the requisite negotiation skill.

In Africa, politics which is supposed to be about the welfare of ordinary people, has unfortunately become the avenue for selfish unpatriotic public office holders to better their lot, while relegating to the background, the actual mandate of essence of power.

In recent times, there has been this debate about African leaders appointing members of their family and friends into key government positions and therefore lacking the courage to hold them to account for acts of incompetence, indiscretion etc. in cases where this argument is grounded in facts, it has been a great source of negative impact on management of state resources.

However, this mantra has now become a tool in opposition propaganda arsenal meant to cloud even the good deeds of appointees, just because they happen to be relations of the leader.

What Africa has to do in order not to continue being the losers on this era of globalization, is strictly adhering to accountability, fiscal discipline, south-south cooperation, realistic policy objectives and knowledgeable people to spearhead foreign policy formulation.

Finally, and most importantly, the drive to industrialize and adding value to our primary products, will go a long way to liberate the continent of Africa from the chronic dependence on handouts from economic super-powers, whose so-called benevolence are, in actual fact, nothing but beautifully-decorated Trojan horses. We cannot continue to blame our misfortunes on neo-colonialism and unfair global trade, when we change the status-quo, get our acts together and take our destiny into our own hands since the rest of the world is not going to wait for us.