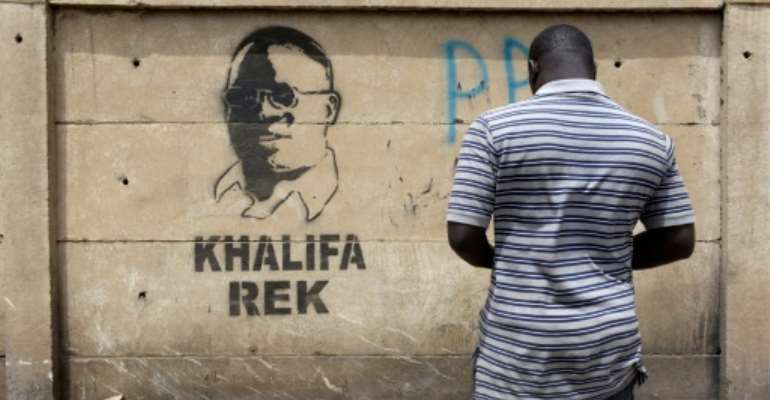 Dakar Mayor Khalifa Sall's five-year term for fraudulent use of public funds has been upheld by a Senegalese court. This graffiti image of the highly popular figure bears the words 'Khalifa Rek' - 'Only Khalifa'. By SEYLLOU (AFP/File)

A Senegalese court on Thursday upheld a five-year jail term against leading politician Khalifa Sall in a ruling that bars him from running in presidential elections due next February.

"The court confirms the judgement against Khalifa Sall," a judge said.

Sall, 62, who is mayor of Dakar, had described the charges against him as politically motivated. He did not attend the reading of the verdict.

The politician was sentenced in March on charges of fraudulent use of public funds.

The court of appeal also ordered him, alongside three other defendants, to pay 1.8 billion CFA francs (2.75 million euros).

He was found not guilty on charges of criminal conspiracy, money laundering and misappropriating public funds.

The trial had been avidly followed in Senegal since the start of the year, throwing a spotlight on Sall's high popularity and stirring debate over next year's elections if he were to be convicted.

Khalifa Sall still has the option of taking his case to the supreme court in a last-ditch effort to run in the February poll.

Along with former minister Karim Wade, Sall represents a growing challenge to incumbent President Macky Sall, who shares the same name but is not a relation.

Both men's lawyers accused the government of misusing the courts to stop them from contesting next year's election.

Wade, the high-profile businessman son of former Senegalese president Abdoulaye Wade, was also charged with misuse of funds in 2015.