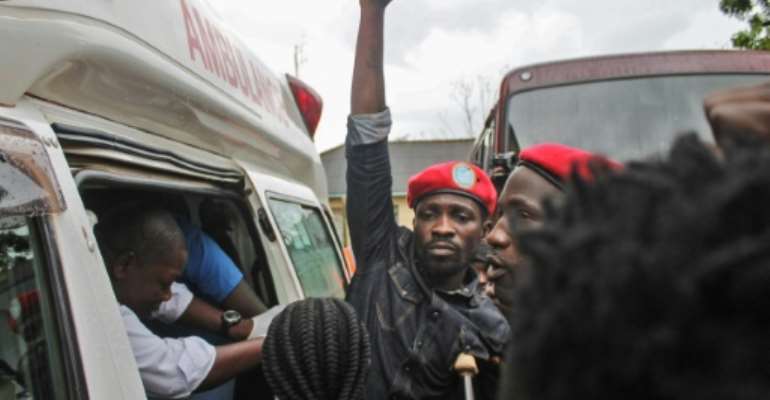 Ugandan singer-turned-politician Robert Kyagulanyi, better known as Bobi Wine, was arrested in mid-August and is facing treason charges, along with 33 others. By Stringer (AFP/File)

The UN human rights chief voiced alarm Wednesday at the unrest rocking Uganda over the arrests and alleged torture of several parliamentarians, including a former pop star.

Zeid Ra'ad Al Hussein called on Kampala to ensure there is an independent investigation of the violence, including allegations of extrajudicial killings, excessive use of force by police and torture.

Singer-turned-politician Robert Kyagulanyi, better known as Bobi Wine, was released on bail on Monday after two weeks in detention but is due back in court on Thursday.

He and 33 others, including two fellow MPs, are facing treason charges in a case that has triggered international outcry.

They were arrested in mid-August after stones were thrown at President Yoweri Museveni's convoy, breaking a car window as he visited the town of Arua on the eve of a parliamentary by-election.

Zeid, whose term as UN High Commissioner for Human Rights ends on Friday, told reporters he had "deep concerns about reports regarding events that have unfolded since August 13" in Uganda.

That day, Kyagulanyi's driver was shot dead while waiting in a parked car while the former singer and three other MPs, a former parliamentarian and an MP-elect were arrested, he said, citing information provided to his office.

Twenty-eight others were also detained, including two women and two journalists, he said, adding that those held were facing charges ranging from treason to incitement to violence and the illegal possession of firearms.

"I am particularly concerned about allegations that law enforcement agents have tortured and ill-treated some of the detained," he said.

In court appearances, Kyagulanyi has appeared subdued and was either hobbling or using crutches. His lawyers and family claim he has been beaten and tortured while in detention, allegations denied by authorities.

Zeid also pointed to a report from the Ugandan human rights commission that Kyagulanyi in detention showed signs of being in pain, with a swollen face, requiring support to walk and barely able to speak.

He also said another parliamentarian had been taken to hospital "in critical condition after allegedly being tortured."

"We have also received accounts of killings, ill-treatments and arrests of persons by law enforcement agents during protests," he said, urging the government to conduct "a thorough, independent and impartial investigation" and to bring those responsible to justice.

Asked whether the government could be trusted to conduct such a probe and if it wouldn't be better to push for an international investigation, Zeid said Kampala should be given the chance to show its goodwill.

But "if it seems to be a sham investigation or something that is not credible, then yes, the next call will be for something along those lines."