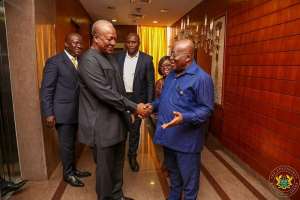 People often ask why Ghana is so poor economically despite its huge human and natural resource wealth. One key answer is that Ghanaian leaders spend so much time purely on unproductive things while ignoring the most pressing issues. They like to spend so much energy and national financial resources on things that add little material wealth to the economy. Particularly politicians tend to focus more on short-term electoral gains rather than addressing long-term dangers facing Ghana. This explains why we have had seven banks collapsed in the country in less than two years.

In the 1960s, Ghana's economy was almost at par with that of South Korea. In 2017, a resource endowed Ghana with more than twice the total land area of South Korea had an economy of $47 billion with a per capita income of $1,663. (GDP may jump to $51 billion while per capita is expected to reach $1,780 by the end of 2018). In that same period, the size of South Korea's economy grew more than 31 times that of Ghana. In fact, between 1962 and 2017, South Korea, (a resource poor country which also suffered a devastating war with its northern neighbour from 1950 to 1953), transitioned from agrarian, low income country to an advanced economy with a GDP of more than $1.5 trillion and per capita income of $29,000. (GDP is projected to be more than $1.69 trillion in 2018 while per capita is expected to exceed $30,000 in 2018). South Korea's leadership did so many things to build and develop the economy from about $3 billion in 1965 to the size of $1.5 trillion in 2017 including spending 4.3% of GDP or $73 billion (more than the entire size of Ghana's economy) on research and development. Building a cathedral or a Buddhist temple was not one of them.

Felix Houphouët-Boigny was president of Ivory Coast from 1960 to 1993. Getting to latter part of his rule, he spent $300 million in four years (from 1985 to 1989) building the largest basilica in the world called Notre-Dame de la Paix (Basilica of our Lady of Peace). But when economic condition in Ivory Coast deteriorated in the early 1990s as a result of the collapsed global commodity market, the cathedral could not save the country. Ivory Coast eventually descended into civil war and instability for much of the late 1990s and early 2000s. My point is that cathedrals and other white elephant projects may make those who build them feel good but they don't make a country stable. It is sound economic policies and prudent use of national resources that make a country rich and sound economic policies should be the area where President Akuffo-Addo, his government and the NPP must focus their energy and brainpower on.

Since the fall of Gaddafi in 2011, thousands of Ghanaians may have perished along with their Sub-Sahara African cousins on their way to find economic opportunities in Europe because they cannot find such opportunities in their own country. This should be a major concern to the Ghanaian government. But that has not been the case. The current government doesn’t seem to know even the number of Ghanaians who have died in Libya because it seems not interested. Yet it wants to spend hundreds of millions of dollars to build a national cathedral in a city that has no adequate drainage system and in which flood kills several citizens every year. Is government getting its priorities right?

In fact, in 2020 when Ghanaians go to the polls to judge the performance of the government, they will not vote based on how many beautiful cathedrals were built but rather how many durable jobs were created, how many school under trees were eliminated, how many hospitals were built, how many dams were constructed to increase agriculture output, how many factories were established to employ the youth, how many affordable houses were built, how many cities, towns and villages had access to fast speed internet broadband, good quality roads, railways, reliable electricity supply and finally how their standard of living has been improved. President Akuffo-Addo must leave Cathedral building project to the churches and focus on building a robust economy that saves banks, delivers jobs, and eliminates poverty and mental slavery.