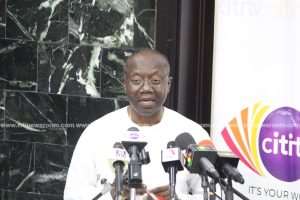 Plain thievery on the part of shareholders and directors of some banks in the country is to blame for the current banking crisis, Finance Minister, Ken Ofori-Atta has said.

“The heart of the matter is that it is really plain thievery on the citizens by certain bank shareholders and directors, also, with a clear compromise of the regulatory leadership on a scale that have not happened before in our country's history,” he said.

The Finance Minister was speaking at a forum organized by the Danquah Institute in collaboration with Citi FM and Citi TV on Wednesday, on the current clean-up in the banking sector.

The Bank of Ghana within the last twelve months has revoked the license of seven defunct banks.

According to the central bank, whereas some of the banks had become “deeply insolvent,” others acquired their licenses through suspicious means.

Government has also issued about GHc8 billion bond at the expense of taxpayers in cleaning up the mess left behind by the affected banks.

Speaking at the forum, Ofori-Atta said government is solidly behind the reforms being undertaken by the central bank saying it is in line with government's vision of building a robust financial sector.

He also assured that those behind the collapse of the seven banks will not go scot-free saying they will certainly be prosecuted to serve as deterrent to others.

“That bank shareholders and directors were diverting depositor's money for personal gain and that there were no checks and balances in how inter-party transactions were done and bank directors and shareholders could lend other peoples' money to themselves without due process. Other times people will show money as evidence to set up banks and turn around to take those same deposits leaving the bank with little or no working capital. So we have destroyed quite of it.”

“We have to do this to ensure that we protect safe and credible institutions of which there are many we have to ensure that depositors and investors don't lose their money. We must make sure that there is prosecution for all those who are involved. This really is about the destiny of our nation,” he added.

Recapitalization not to blame for banking crisis

The Finance Minister also rejected claims that the GHc400 million recapitalization policy directive by the Bank of Ghana to the commercial banks is to blame for the financial crisis.

“The push toward recapitalization has nothing to do with the problem we are trying to solve. That's a whole different issue to ensure that we make the banks stronger so that they can continue with the business of intermediation that is being required,” Ken Ofori-Atta added.

The forum was themed: “The banking sector clean-up – Are depositors safe?”