To Kill Or Not To Kill: Of KARMA Creation And Aversion 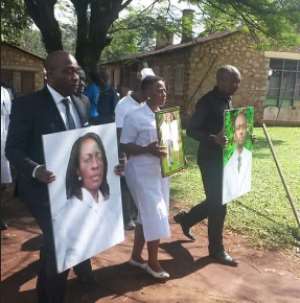 Cameron troops are killing non hostile civilians; students, children, medical personnel and old people in Anglophone regions of Northwest and Southwest on a daily basis. Those who kill are believed to have been sent to kill.

It appears, once on the warfront, the decision to kill or not is all within the moral authority of the soldier. Nobody is actually on the field to supervise and determine whether the soldier killed everyone found or not.

When death missed me, by a hair, last Saturday in Mbengwi, it was the choice of the soldier to shoot out my brains or leave me alive. There was nobody there urging the soldier to kill me or spare my life. As if visited by some angels, the soldiers returned my laptop and walked away telling me to stay inside and not go out.

After leaving me asking if there were no people in the village, the only five other people they met were killed. I cannot still believe my luck and I am unable to convince people how I managed to cheat death from the hands of soldiers detailed to shoot at every moving object.

Far from the scene of the action in Mbengwi, in relative safety under the armpit of Goliath in Yaounde, I am still having nightmares and sleep disturbance episodes symptomatic of post traumatic stress syndrome. My mind is active thinking about philosophical and theological explanations to my luck with the soldiers.

KARMA, law of cause and effect might attempt an explanation to my luck and misfortune of others. KARMA is created and KARMA could be averted. What we do in this life comes back full circle as merit or demerits, pay or punishment. I am not trying to justify the killing of nurses by Cameroon soldiers as a matter of bad KARMA from the nurses. No! I must not be misunderstood.

The couple, nurses believed no army would execute them finding out they were nurses just returning from their civilian activities in the hospital and on the farm. Young Anim, at 18 had not created any KARMA to have been killed for no offence.

KARMA here is created by the soldiers, who on the line of duty, misused their authority to kill those they should have protected. The Bible and other holy writings are fundamentally correct as the inspired words always come true.

Often in life, when people are visited by tragedy, we task ourselves to explain why. Why has this happened to these people. Why them?

Even what we do in the dark, is recorded by the law of KARMA. No soldier killing, raping and burning houses would go unpunished spiritually and physically in this life. Killers would be killed here or theirs would be. I am from a land where verbal rebuking is stronger than witchcraft. Cursing in META is terrible witchcraft and the curses of the aggrieved always come to haunt the aggressors.

Let the soldiers continue killing. Even if Ambazonia defence forces do not kill them, they shall be killed in this life. KARMA never mistakes its authors.