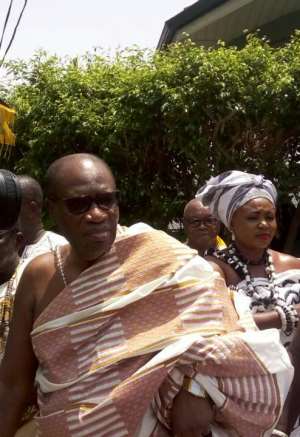 Principal and accredited kingmakers and elders in Ga Royal Paramount Stool have threw a strong words of warning to the National House of Chiefs (NHCs) to stop its continuous habit of creating chieftaincy dispute within the factions of the Ga Black Paramount Royal Stool.

According to them, the NHCs did not have transitional and chieftaincy locus to endorse who becomes the Ga Mantse to success the late substantive Ga Mantse, Boni Nii Amugi ll who died in 2005.

The kingmakers told Today that the law that established the NHCs does not allow it to endorse and declare who is the chief, noting that the law only allows the NHCs to register the legjmate chiefs after the effective consultation of genuine kingmakers and elders of the traditional areas.

"We want to say that the move and decision by the current members of NHCs to be going contrary to the chieftaincy Act by endorsing Nii Tackie Adam Latse as a Ga Mantse is against the customs and traditions of the Ga State," they stated.

The kingmakers noted that the current Ga Mantse is King Tackie Tsuru Teiko II who was installed traditionally and constitutionally installed by the only the recognised and legimate principal Kingmaker to the Ga Royal Paramount Black Stool, Dr. Nii Tetteh Kwei II.

They asserted that Adam Latse is a "slave" who cannot be installed to sit on the Black Ga Paramount Royal Stool, stressing that "This will is an abornation and great disaster to the four royal ruling houses in the Ga state."

They reaffirmed that the Ga Royal Paramount traditional and customary power was invested and entrusted on the hands of Dr. Nii Tetteh Kwei II to install rightful person from the four royal ruling houses in succession whose turn was due to ascend the throne to succeed the late substantive Ga Mantse, Boni Nii Amugi II who died for the past years ago.

They noted that the series of the court judgements and committee reports have attested to the traditional and customary facts of the Ga State that Dr. Nii Tetteh Kwei II position to install King Tackie Teiko Tsuru II from the Teiko Tsuru Royal Ruling House at Ga Mashie in 2011 to ascend Ga Mantse Black Stool hence cannot be overturned, challenged and questioned by any indigene of the Ga State.

They clarified the traditional and chieftaincy authority of a Ga Mantse mantle and called on the faueding factions of the four royal ruling houses of Ga Paramount Royal Stool to cease fire in order to forestall peace at Ga Mashie.

According to them, the mantle of the Ga Mantse is a symbol of authority for any four royal ruling house that has possession of it.

This, they noted the holding ruling house must prepare candidates one of which would be chosen as the next royal to ascend unto the throne.

They pointed out that the handing over of a mantle is done when a new king is taken through rites and rituals and it is given to the next ruling house, in succession.

"In 1988 the Abola Piam House was confirmed and accepted as a Royal House but a note must be taken that at this time, the mantle, Ga Mantse Authority had already been given to Nii Teiko Tsuru We as far back as 1965," they explained.

According to them, this makes it very legitimate for Nii Teiko Tsuru We to propose a candidate to ascend unto the Ga Mantse Black Stool.

They noted that against the knowledge and acceptance that Akropong Division has the right to present two (2) candidates back to ascend unto the Ga Mantse throne, Abola Piam We who did not receive the authority to appoint a Ga Mantse mantle in 1965.

"This is because they (Abola Piam We) were non-existent at that time, still has the opportunity to prepare a suitable candidate to be presented by the Akropong Division after the reign of the Nii Teiko Tsuru Royal House’s candidate," they further explained.

This position, according to them , is on rotational basis among the four (4) Royal Houses.

They expatriated that the last Ga Dsasetse documented in the books of the Ga Paramount Stool Dsase (GPSD) was Nii Kwaku Niri II, who hailed from Nii Tackie Komey Royal House and passed on in 1991.

They stated that a caretaker in the person of Sqn Ldr George Tagoe (deceased) was appointed to ensure the appropriate customs, rites and traditions were put in place to appoint an official Ga Dsasetse to lead the GPSD.

They alludded to the fact that the next Ga Royal Paramount Stool Dsasetse was rightfully the turn of Nii Amugi We.

They explained that the honours fell on the Tetteh Kwei’s as history recalls that Nii Tetteh Kwei I from Ayikweitse Kpono We (Adaanu We) Gate was Ga Dsasetse from 1926 to 1932.

"No such record of Ga Dsasetse-ship was found in the line of the Yartey/Yaoboi We (Adaasa We) gate.

"Dr. Fritz-Gerald Emmanuel Nii Amui Tetteh-Quaye (a retired banker) was nominated, selected and installed on the 23rd January, 2006 with the Stool name of Nii Tetteh Kwei II, as Ga Dsasetse," the report stressed.

"The Yartey/Yaoboi We (Adaasa We) gate who were not amused and had vowed to cause a havoc if they were not given the opportunity decided to install Nii Yaote Toga II – corrupted from Nii Yartey Toga, a Stool names of the Ga Seitse (1949) hailing from their gate, which they did on in June, 2006," it noted.

According to them, this illegal act by Nii Yaote Oto-Ga and his group has continuously tried to bring a division in the Nii Amugi We clan.

They stated that the Deity of Amugi We is worshipped by the Tetteh Kwei’s as well as family House apportioned to them unlike the Yartey/Yaoboi We (Adaasa We) gate that has no family House to themselves as was confirmed by the Sakumo Wolomor in 2007.

They explained that the Nii Teiko Tsuru Royal House unilaterally has accepted, confirmed and supports the candidature of their son King Tackie Teiko Tsuru II as this is displayed by the unity, calmness and reign of peace in the Nii Teiko Tsuru family with no finger or so being raised from any quarter against his ascension unto the Ga Royal throne.

'We will stand united to oppose e-levy' – Haruna Iddrisu but...
44 minutes ago