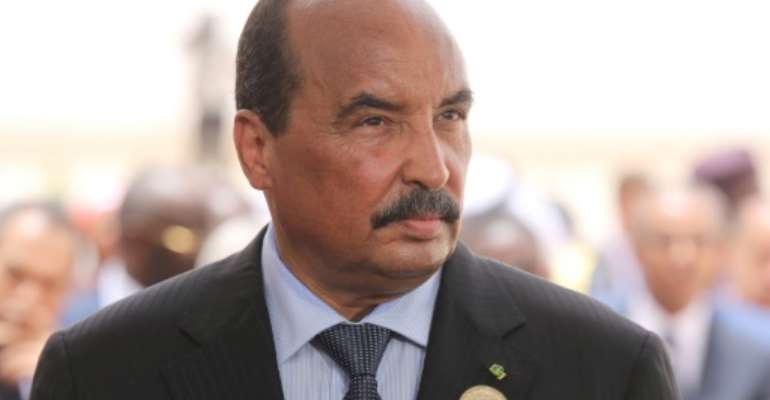 President Mohamed Ould Abdel Aziz was injured when his car was "accidentally" shot at by a soldier, according to the government's version of the October 2012 events. By Ludovic MARIN (POOL/AFP)

A Mauritanian court has handed a six-month jail term for "slanderous denunciation" to a soldier and a former senator who contradicted the official account of how the country's president was shot and injured in 2012, a judicial source said Tuesday.

According to the government's version of events, President Mohamed Ould Abdel Aziz was injured on October 13, 2012 when his car was "accidentally" hit by rounds fired by a soldier on patrol about 40 kilometres (25 miles) from the capital Nouakchott.

The incident left the former general needing a short period of hospital treatment in France.

On Monday, Mohamed Ould Ghedde, a former opposition senator, and soldier Mohamed Ould Mohamed Mbarek -- who had been alongside the trooper who fired the shots -- were given six-month terms, three months of which were suspended, for casting doubt on this account.

Soldier Mbarek, in a posting on the senator's Facebook page, had said his comrade neither aimed at the president's car, nor did he hit it -- an account that appeared to suggest a darker motive for the president's injury.

Mbarek was arrested following a complaint by his fellow trooper, Lieutenant Elhaj Ould H'Moudy, who supported the official account.

During the trial, which began on August 9, Mbarek retracted his claim, saying that his version of events had been "the fruit of his imagination", while adding that he "needed the money" which the senator promised to give him.

He championed a controversial referendum in August 2017 which included a constitutional amendment that abolished the country's senate.

The accused senator also faces another trial for "corruption", in a separate case linking him with other former lawmakers who opposed the constitutional amendment.