Even Kufuor Listens To Rawlings’ Phone 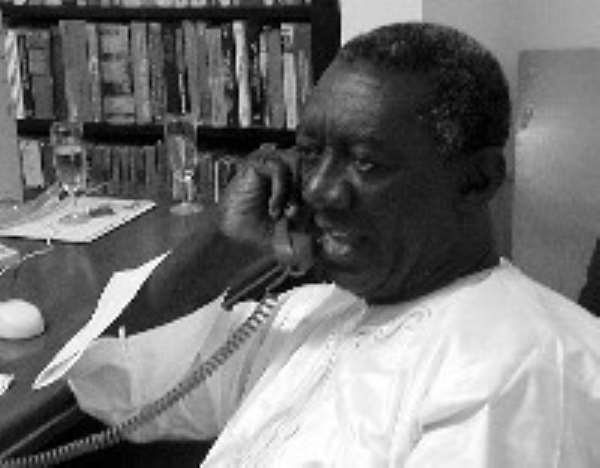 Many people were surprised to learn that the Vanguard, according to the paper's deputy editor's amazing declaration on air, possesses the means of listening to virtually anyone's phone conversations in the country.

Their fears were compounded when Kweku Baako, the editor in chief of the Pro-NPP newspaper, Crusading Guide came out boldly not only to claim the possession of a similar capacity but went on to justify the 'criminal' act on the grounds that any individuals with the potential of subverting the Kufuor regime must be similarly monitored.

The Lens' enquiries with a source close to President Rawlings have revealed that the former President knows for a fact that his calls are not only monitored by the national security but are also sometimes listened to by the current President, Mr. J.A. Kufuor. The source revealed to the Lens that as far back as the first few months of 2001 when Mr. Kufuor assumed the reins of power, the former President became aware that at least some of his private conversations were being monitored by or being played to President Kufuor.

It will be recalled that in the first five months after handing over to President Kufuor, the former President never once criticized the new regime in public. A series of behind closed doors discussions were being held between the two personalities at the time as part of efforts to ensure a completely smooth transition.

According to the source, President Rawlings later learned that the current President at a point started complaining bitterly to the personality who was mediating, that the former President had been hurling insults at him which insults were putting the continuance of the behind closed doors meetings in jeopardy.

Our source expla! ined that since it was public knowledge at the time that President Rawlings had not even once in public said anything negative about the Kufuor government, the mediator told President Kufuor that those accusations could not be factual since nothing of that nature had come into the public domain.

It was at that point that President Kufuor dropped the bombshell that indeed the former President had been insulting him and members of his team when talking on his phone.

The source also informed the Lens that at no stage during the PNDC and NDC rule was there ever the need to procure any devices to tap the conversations of political opponents and people con! sidered to be harboring destabilizing intentions towards the government of the day.

'We never stooped that low. Not even at the peak of dissident activity in the early days of the PNDC, did we ever have to procure instruments to listen to private telephones of any individuals. The ordinary folks in different stations of life, be they drivers, cooks, washmen or maids etc. were those who on their own provided us with crucial intelligence information that we needed.'

The source also explained that desperate attempts, being made to twist the recent statement by former Minister in Charge of national Security, Mr. Kofi Totobi Quakye as implying that the NDC had procured gadgets to do the kind of shameful things that are being freely done by the NPP today, are truly unfortunate. 'Those gadgets, were only brought in at the instance of the American government as part of the prerequisites to ensure the protection of President Clinton,' the source explained.