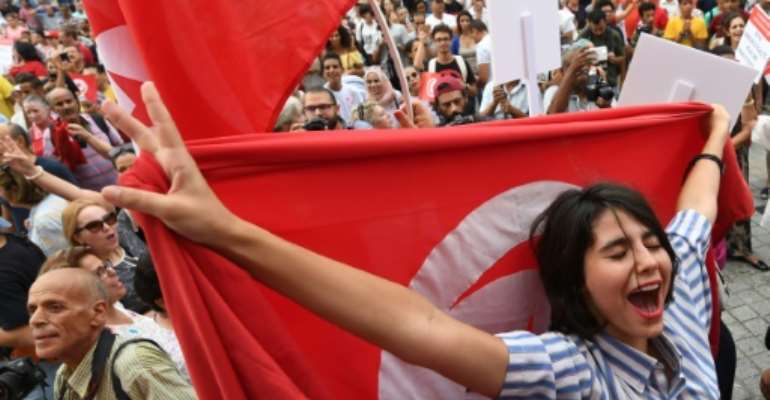 A woman holds the Tunisian national flag during a demonstration in Tunis to demand equal inheritance rights and to mark the country's Women's Day on August 13, 2018. By FETHI BELAID (AFP)

"I propose to make equal inheritance a law," he said in a televised speech on Tunisia's Women's Day.

The text of the bill will be presented to lawmakers after the end of the parliamentary recess in October, he said.

The proposal to equalise inheritance is among the most hotly debated of a raft of proposed social reforms, guided by a commission the president set up a year ago.

The commission suggested inheritance should by default be shared equally among male and female heirs.

Similar to many Muslim-majority countries, Tunisian law currently stipulates that male heirs should receive double the assets given to females of the same level of kinship.

"We will overturn this situation" and make equality the rule, while unequal sharing of inheritance will require special dispensation, Essebsi said.

"It is my duty as president of all Tunisians to unite and not to divide," he said.

Following the announcement, around 2,000 supporters of the change rallied in the capital Tunis, police said.

"We have come back down onto the street for equality," crowds chanted on Monday evening, waving banners and the national flag.

The proposed inheritance equality law would be incorporated into the country's 2014 constitution, which has been praised as a key milestone.

Tunisians making a last will and testament would still be able to divide their assets as they see fit, with the equality law being applied in cases where no such preferences have been stated. 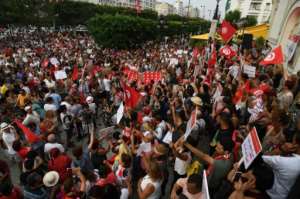 Long seen as a pioneer for women's rights in the Arab world, Tunisia has pushed ahead with other reforms promised after its 2011 revolution.

"We give hope to all women in the Arab world," said Bochra Belhaj Hmida, head of the commission which proposed the changes.

Some opponents of the bill argue men should have greater inheritance rights because they must provide for their families.

But according to Hlima Jouini, a member of the Tunisian association of women democrats, such an approach fails to take account of societal changes.

"Nowadays the woman is responsible for her parents, for her family, the man is no longer the only person responsible or the head of the family, therefore the legislation must conform to this change," she said. 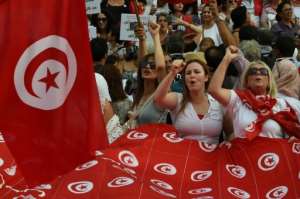 As part of Tunisia's reforms, a law on violence against women was passed last year and came into force in January.

After several months of consultations with civil society and political parties, the commission also proposed decriminalising homosexuality and abolishing the death penalty.

More than 5,000 people protested against the proposed reforms in front of Tunisia's parliament on Saturday.

Some held copies of the Koran and shouted "we will defend Islam with our blood!"