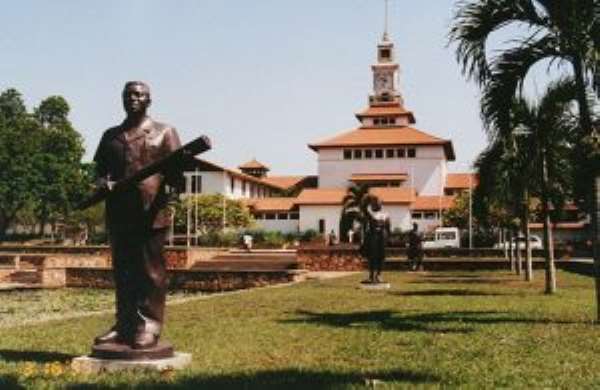 A civil society organization, Institute Responsible for Tracking Accountable Governance (IRETAG) is urging the government to look into the circumstances surrounding the signing and abrogation of the $64 million deal between the University of Ghana and New York-based private firm Africa Integras.

The abrogation of the contract recently resulted in the University of Ghana being slapped with a $160 million judgement debt by a London court on 2nd of August, 2018.

Africa Integras entered into the agreement with the University of Ghana in 2014 which was signed by its former Vice Chancellor, Prof. Ernest Aryeetey as structured as a 25-year Build, Operate and Transfer (BOT) arrangement.

The projects involved the construction of an expanded facility for the College of Humanities and a new College of Education.

Africa Integras was also to procure thousands of new students' hostel beds, to be divided between undergraduate and graduate students mostly to serve the College of Health Sciences.

However, following the exit of Prof. Aryeetey and the swearing-in the new Vice-Chancellor, Prof. Ebenezer Oduro-Owusu, it was alleged that arrangement by Prof. Aryeetey was fraudulent.

It was also claimed that Prof. Aryeetey had received financial inducements to allow the project to proceed since it was economically unreasonable and would cost the University more money.

But Prof. Aryeetey denied the claims, saying the University during his tenure went through all the right procedures before signing the agreement with the company.

But IRETAG believes that the entire situation must be investigated to as the judgement debt will ultimately become a burden of the state.

In its statement, it said, “The contract was expected to have been fully executed by the end of 2017 and operationalized by Africa Integras for a stated duration of 25 years with annual installment settlements of $10 million under a Build Operate Transfer (BOT) Private Public Partnership (PPP) agreement. This translates that the University of Ghana by the end of the 25yrs would have paid $250million to Africa Integras thus $186 million in excess of the actual cost of the project.”

Read the full statement below:
Subject: $64M Africa INTEGRAS-UG deal – A bane or a blessing?

We the undersigned, for and on behalf of the Institute Responsible For Tracking Accountable Governance-IRETAG, do hereby call on the high office of the President of the Republic of Ghana, His Excellency Nana Addo Dankwa Akuffo Addo, The Bureau of National Investigations- BNI, The Inspector General Of Police-IGP, Ghana Police Service and The Economic and Organised Crime Office-EOCO to urgently actuate the legal processes of investigations into the contract between the University Of Ghana and Africa Integras, as an entity made to be known as construction company based in London.

Foregoing, the contract was expected to have been fully executed by the end of 2017 and operationalized by Africa Integras for a stated duration of 25 years with annual installment settlements of $10 million under a Build Operate Transfer (BOT) Private Public Partnership (PPP) agreement. This translates that the University of Ghana by the end of the 25yrs would have paid $250million to Africa Integras thus $186 million in excess of the actual cost of the project.

It became interesting to note that after the expiration of the tenure of the Prof. Aryeetey in 2016 which subsequently led to the induction of Prof. Ebenezer Oduro as the new Vice Chancellor for University of Ghana has raised serious concerns over the fraudulently perceived terms and conditions under which the BOT agreement with Africa Integras was hurriedly signed.

Relevant key stakeholders within the University community called for the abrogation of the contract as it seeks to somewhat not project in the best interest of the university and likely to risk the seizure of the assets of the University of Ghana in the event of not meeting the resettlement terms and conditions.

More recently, on the 2nd August 2018, a ruling was passed in favour of Africa Integras demanding of the University of Ghana to cough $160million as the cost of terminating the contract for which not even 50percent (50%) progress has been made on the project.

We, the Institute Responsible for Tracking Accountable Governance-IRETAG is asking these legitimate questions which beg for many answers;

1. Was the University Council and Senior management consulted in the signing of the agreement? If yes, Prof. Aryeetey and the then council must be invited by EOCO for causing financial loss to the state.

2. Does the University have the constitutional mandate to sign contracts for such projects without parliamentary approval of the loan facility?

3. Were the relevant and responsible procurement procedures adhered to through competitive bidding and evaluation of alternatives in the award of such BOT agreement to ensure value for money and ease of terms of resettlement of the loan facility??

4. To what extent did the new Vice Chancellor consult with the relevant institutions of state before activating the process to abrogate the contract which eventually puts the nation’s premier university in this sorrowful ruling.

Mr. President, we foresee more hardship knocking on the already stressed financial doors of University Of Ghana students and the good people of Ghana. Hence, we, therefore, pray you to invoke your legitimate powers to scrutinize the subject herein, to wit, wholeheartedly believing in the spirit and letter of the 1992 Constitution which seeks to safeguard the public interest against any arbitrary and haphazard charges and levying of students without prior approval of Parliament.

It’s really frustrating and upsetting, for the council in charge of the said agreement to not see the necessary need to read the agreement thoroughly, situate, apply and employ critical thinking into the agreed documents knowing well the negative consequences which are tantamount to crippling our economic growth both at the local and international gateways.

In the exercise of maximum convenience, when all facts have been collated, and some person(s) are found defaulted, the government should make sure it wholly actuate the appropriate sanctions and punishment towards such person or persons.

Taking inspiration from the after effect and the corollary of the fights against corruption herein Ghana, it is obvious that corruption has eaten deep into the root of this country, so much so that many people even see the corrupt practices has been normal. Corruption is killing this country, it has and continues to damage the economy, the majority of the Ghanaian populace are suffering, even our currency is depreciating sharply against the major international trade currencies.

We, *Institute Responsible For Tracking Accountable Governance-IRETAG* state ipso facto our readiness to track all government processes and engagements towards achieving the mantra “Ghana Beyond Aid.”

It is our unbending resolve to exploit every possible legal avenue to achieve a downward explanation, of which failure on the part of the offices stated herein, a legal action will be actuated in the Supreme Court to interpret the jurisdiction of the autonomy of the Vice Chancellor and the University of Ghana in negotiations of the building complexes and not the duty of Government under the watchdog of the Ministry in charge of public building constructions.

Thank you as we await your willingness to adhere to our plea and to ameliorate bad governance foregoing.