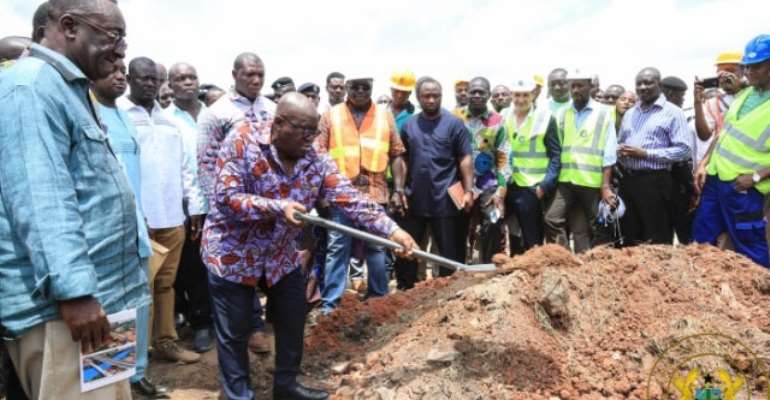 President Nana Addo Dankwa Akufo-Addo, on Friday, 10 August 2018, at the start of his 5-day tour of the Ashanti Region, cut sod for the commencement of the Kumasi roads facelift project.

The project, funded by the Government of Ghana, Road Fund and the French Development Agency, will ensure that 260 kilometres of roads within the Kumasi metropolis, Ejisu Juaben, Sekyere East, Bekwai and Mampong municipal areas, witness major improvements.

Speaking at the ceremony, President Akufo-Addo noted that the present state of roads in Kumasi does not befit its status as Ghana's second largest city, the reason why Government is committed to improving quickly the condition of the roads in Kumasi, and by extension in the Ashanti Region.

That is why Government, through the Ministry of Roads and Highways, has begun work on some critical roads in the region.

These include the Kumasi Drainage and Roads Extension Project, which involves the construction of the lake road into a two-by-two dual carriageway, from the Coca-Cola bottling plant to Dompoase junction; lining of the Sissai River for two kilometres to reduce the incidence of flooding; construction of critical bridges and footbridges over the Sissai river to connect communities along the river; and asphaltic overlay of ten kilometres of roads within the project area.

Additionally, the President indicated that the facelift project will involve the rehabilitation of 100 kilometres of roads within Kumasi and Mampong, and the construction of over 100 kilometres of highways and feeder roads in the Region, all funded by the Sino-Hydro facility.

The project, he added, will also take into account the remodeling of the four roundabouts, between Ejisu and the Kwame Nkrumah University of Science and Technology, and also asphaltic overlay on 135 kilometres of roads within the Kumasi Metropolis, to deal with the issue of potholes, and, thereby, give the roads in the Metropolis a new lease of life.

“Let me use this occasion also to announce that, before the end of this year, construction works will begin for the dualization of the road from Accra to Kumasi,” President Akufo-Addo said, much to the delight of the gathering.

President Akufo-Addo urged the Ministry of Roads and Highways and its implementing agencies to ensure that adequate and proper supervision is given to all the works being undertaken, and, thereby, guarantee value for money.

“I urge all those whose properties might be affected by the various projects to co-operate with the Ministry of Roads and Highways and other relevant state institutions in accessing the compensation due them. We shall ensure that fair and adequate compensation is be paid to all persons and properties that shall be affected,” he added.

These projects, the President said, represent an exciting phase in the infrastructural development not only of Asanteman, and, but, indeed, of the entire country.

“We are on the cusp of a bold, new beginning, and I urge all Ghanaians to join hands with Government as we strive to bring progress and prosperity to all parts of our country,” he added.

Prior to the ground-breaking ceremony, President Akufo-Addo paid a courtesy call on the Asantehene, Otumfuo Osei Tutu II, to inform him of his 5-day tour of the Region, and the activities he will be undertaking whilst in the Region.

The Asantehene, on his part, thanked the President for the gesture of his visit, and wished him well during the tour.