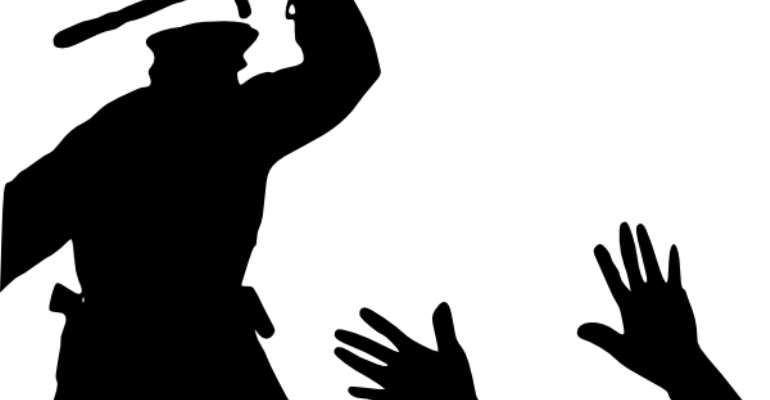 Residents of Asafo in the Ashanti Regional town of Kumasi have expressed anger following alleged police brutal assault of a physically challenged person.

They said it is high time Lance Corporal Emmanuel Gyamfi, who allegedly beat up 42-year-old David Ayembe after he questioned his behaviour is brought to order before he kills someone.

According to Mr Ayembe, the officer fired a warning shots as he attempted to disperse a group of individuals who had gathered to beg for mercy for a driver being assaulted by the officer popularly known as ‘Mosquito’ at the Opoku Sika Washing Bay.

Nursing a fractured wrist, he told Luv News’ Nana Yaw Gyimah that he was drawn to the incident by the sound of the gunshot.

“He came to where I stood and I asked him why he always comes around to fire warning shots in a drunken state. I pointed out to him that the gun is not to be used in such a manner as it can kill someone.

“But in reaction, he came my way, pulled me up and punched me. I landed heaving on a nearby container injuring my hand in the process,” the man with one prosthetic leg told the reporter.

Mr Ayembe said he was thrown out of the Kumasi Central Police Station when he made an attempt to lodge a complaint against his abuser.

This was after he followed a police patrol team which had come to the scene of the incident to pick up their drunk colleague, he claims.

“They wouldn’t listen to me as I tried to lodge an official complaint against Mr Gyamfi so they took my contact details to give to him when he is sober. I then saw them lock him up in police cells,” he said.

When the reporter contacted people at the Asafo washing bay, those who claimed to have witnessed the incident confirmed it.

However, most of them refused to speak on the record for fear of being victimized by the police.

One resident told the reporter that although he did not witness the recent incident, this is not the first time he has seen Gyamfi exhibit such a behaviour.

Inusah Abasse said their reports to the police authorities of Gyamfi's previous shooting incidents in public fell on deaf ears.

“I have lead residents to report his dangerous behaviour to the previous regional commanders but nothing has come out of it. We are fed up with reporting him. My only worry is that one day he may kill someone since he shoots in a drunken state,” he added.

The police told Luv News, the officer was detained and later released on bail while the matter has been referred to the Criminal Investigations Department (CID) at the Central Police Station.