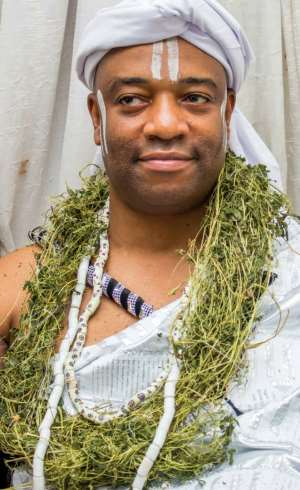 The legitimate overlord of the Ga State in the Greater Accra region has cast doubt over the purported clearance issued by the court in the legitimacy of Nii Adama Laste, one of the claimants to the Ga stool.

King Tackie Teiko Tsuru II, the Ga Mante casts this doubt in an interview with the media after news broke that the court has cleared his arch rival in the case of legitimacy.

According to him, as a party in the case pending before the court, ‘we have not attended any court that has cleared the said chief as reported by a section of the media’.

He stated categorically that no court has ruled on the matter of legitimacy of the self –styled chief of the Ga state.

‘I remain the legitimate chief of the Ga state in accordance with the Chieftaincy Act 759 of 2008 which has it stated in Section 57, Sub- Section (1) Who a Chief is’’ he said.

He said based on this Act and Section 57, Sub-Section (1) a chief is a person hailing from the appropriate house and lineage, validly nominated, selected, enstooled or installed in accordance with the relevant customary laws and usage of the particular area.

In case of Nii Adama Laste the situation was not in accordance with the Act so how can a court rule on his legitimacy when the process of nomination was questionable he questioned.

He explained that appointing a Ga Mantse is the preserve of the Ga Paramount Stool Dzase (GPSD) made up of the four (4) Royal Houses.

It is however not true the court has taken a decision on the legitimacy of the said chief he added.

‘’The Ga Dzasetse of the Ga state on the strength of the ruling by the Greater Regional House of Chiefs 2014 which declared the Ga stool vacant hence my nomination by the royal house indicating his nomination went through the mail’ he maintained.

Below ids the process for the nomination of a Ga Mantse

1. The GPSD also appoints the Dzasetse from one of the four (4) Royal Houses.

2. Both the positions of Ga Mantse and Ga Dsasetse rotates within the four (4) Royal Houses.

3. The four (4) Royal Houses are made up of numerous gates. Some of the gates are Royal Gates (from where descendants can ascend unto a Royal Stool) and others are Non Royal Gates, call them supporting gates.

4. From time immemorial, history tells of three (3) Royal Houses being Teiko Tsuru We, Amugi We and Tackie Komey We.

5. These Houses have on rotational basis always provided candidates for the positions of Ga Mantse and Ga Dsasetse.

6. In 1988, a Ruling from the Greater Accra Regional House of Chiefs in Dodowa confirmed a 4th Royal House out of the Teiko Tsuru Royal House to enjoy the Royal Stool and that House was Abola Piam We.

7. By the confirmation of the 4th House, Nii Teiko Tsuru Royal Ruling House and Abola Piam We were under Akropong Division while Nii Tackie Komey We and Nii Amugi We were under Agyemankese Division.

8. Evening this out means every Divisional Head (Agyemankese or Akropong) will have the right to present two (2) candidates in a row to ascend unto the Ga Mantse Stool, in succession.

9. It would be worthy to note that most of the Mantsemei hailing from Abola Piam namely: Nii Ofoli Tibo, Nii Kwaye, Nii Ofoli Kakpo etc al ruled as regents whilst Nii Tackie Obilie I also ruled in the name of Nii Teiko Tsuru Royal House.