Consolidated Bank Staff Warned To Prove Themselves Or Face Dismissal 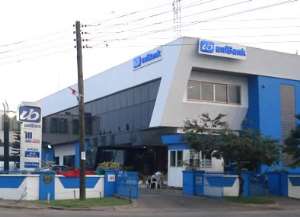 Staff of the newly-established Consolidated Bank will have their employment assessed after a 60-day period to determine whether they are to continue working with the bank or not.

A letter sent to the about-3,700 staff yesterday morning, signed by the CEO Daniel Addo, said: “The purpose of this letter is to inform you that you will be working with the new bank for a period of 60 days for certain, during which time it will be possible for your employment status to be assessed”.

The letter added that based on the assessment, “A determination will be made as to whether you will continue to be in employment with the Consolidated Bank Ghana Limited. Kindly be reminded that you will still operate from your current workplace”.

The central bank on August 1 announced the revocation of universal banking licences from five banks and thus created the Consolidated Bank to take over selected assets and liabilities of the five institutions. The banks are the uniBank, Construction, Royal, BEIGE, and Sovereign Banks.

Boulders Advisors Limited, led by Reggie France, has also been appointed as Advisor to the Consolidated Bank Ghana Limited, while Nii Amanor Dodoo of KPMG was appointed as receiver for the five banks.

Since revocation of the five banks’ licences, labour unions have urged the new bank to secure the jobs of workers – but analysts noted that significant jobs will be lost.

The Ghana Trades Union Congress (TUC), even though welcoming the decision by the BoG to consolidate five indigenous banks into a single entity, warned that no jobs should be lost.

“Given the current state of joblessness in the country, it is important that developments in the banking sector and the measures being taken to address them do not add to the huge unemployment challenge. We urge the Bank of Ghana to do everything in its power to safeguard all the existing jobs,” TUC General Secretary Yaw Baah said in a press statement issued in Accra.

But the Managing Director of Dalex Finance, Ken Thompson, has predicted job-losses. According to him, management of the Consolidated Bank will be forced to downsize staff of the collapsed banks because it will not be able to stomach all the staff.

“It [the collapse of the banks] doesn’t come as a surprise to me because it’s been long overdue, but I think it will certainly bring about job losses so staff should brace themselves,” he said.