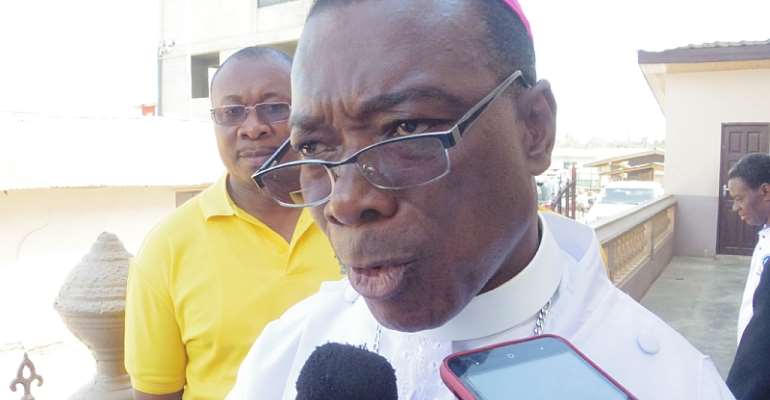 He has accordingly called for all hands on deck to improve standard of education in the country.

" This is a new policy being introduced so we have to support it to succeed.

We can't just throw it overboard. All hands ought to be on board to let the government offer the needed quality education to the children.

We have a problem as Ghanaians, some of us think we simply have to oppose government policies whether good or bad. Especially when in opposition, we should oppose ruling government's policies.

Ghanaians should reason with the government for the Double Track System to succeed.

Rt. Rev. Dr. Buabeng Odoom stated these at the Century Anniversary Lunching of the Gomoa Ekwamkrom Ebenezer Society of the Methodist Church on Sunday

According to him, Ghanaians have role to play towards national development and we must work together by having national interest at heart.

He noted that Methodist Church being part of the Ghanaian society would contribute positively towards its Growth and Development.

" The Church is part of the Ghanaian society, it therefore behoves on the two to work together in unison to ensure total welfare of the citizenry.

The Methodist Church has been encouraging its members to take part in national and communal programmes , activities and policies such as National Sanitation Day and communal labour among others aimed at improving the lifestyle of the people.

The government should empower Churches to take full control of mission schools to instill discipline and morality. This will intensify monitoring and supervision in the schools especially at the basic level"

Addressing the congregation, Bishop Buabeng Odoom tasked church leaders to encourage the youth to take active roles towards the growth of the church and to enhance membership drive.

Narrating the history of the Church, the Chairman of the Century Anniversary Planning Committee, Dr. Edmund Kaitoo said Gomoa Ekwamkrom Ebenezer Methodist Church was established in 1919 at a place called Ekwam Village.

" In 1919, a foundation Stone was laid for commencement of the Ebenezer Wesleyan church. Everything was lively.

There were only two churches in the town. Ahmadiyya Muslim Mission and Methodist.

Construction of the new building was done on communal basis irrespective of ones religious affliction. The people had to forgo their own duties and participate in putting up the church.

According to Dr. Edmund Kaitoo, Gomoa Ekwamkrom Ebenezer Methodist Church assisted by citizens who were not members of the Church correctively constructed a school which has transformed the lives of the people educationally, social, economically and morally noting that unity between the church and the community exist till date.

The Eastern Regional Correspondent of the Ghana Broadcasting Corporation, Mr. Ebenezer Onumah alias 'Kwamina Onuma' was commended for his immense contributions to the church.

" Another member in Ekwamkrom Ebenezer Methodist Society is Mr. Ebenezer Onumah. Through his hard work, he raised Methodist Guild Ghana to International level when he became the connexional Secretary.

He was the first Ghanaian Guilder to be invited by the British Methodist Church for a Holiday Camp in Leeds in 1999.

Since his term of office ended, no other person has been able to set or break that record" Rt. Rev. Dr. Kweku Buabeng Odoom noted urging the youth in the church to emulate his selfless contribution.