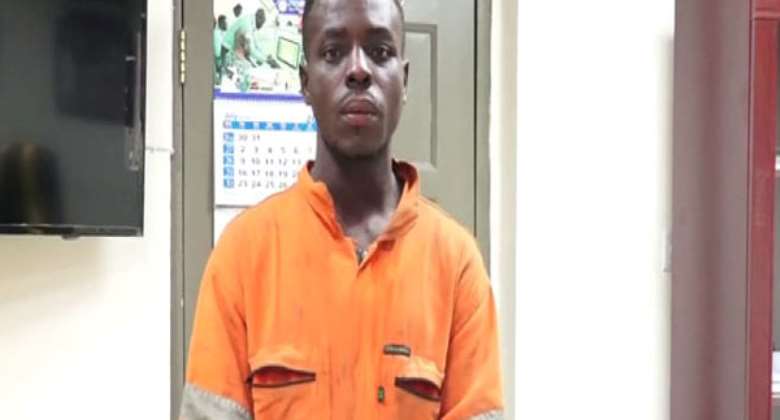 A 28-YEAR-OLD Ghanaian has been apprehended by security personnel at the Tema Port for attempting to stow away to the United States of America (USA).

In an attempt to travel illegally, the culprit, Selassie Jordan, who hails from Efiekuma, a suburb of Takoradi in the Western Region, was said to have attempted boarding a Cameroonian vessel, MV Yarris.

Jordan was said to have thought the vessel was sailing to the US where he could find greener pastures.

Narrating the incident which led to the arrest to DAILY GUIDE, Tema Port Security Manager, Colonel Joseph Punamane, explained that Jordan was spotted Monday morning by port security officials and cautioned to desist from embarking on any illegal form of travelling.

According to him, the suspect returned in the evening, this time climbing into the vessel with the aid of anchor rope hanging on the vessel. He added that port security personnel quickly moved in and arrested the suspect who was locked up in a chamber of the vessel.

During interrogation, Selassie Jordan, in a sober mood, told port officials that he thought the vessel was bound for the USA. He said it was poverty which had forced him to embark on such a dangerous journey.

He, however, expressed worry over how such incidents tarnish the image of the port and the country at large

He warned Ghanaians to desist from such acts since vessel owners often end up killing such persons and disposing them of into the sea whenever they are caught, because per the laws, vessel owners are mandated to bear the cost of the repatriation of stowaways caught on vessels.

Meanwhile, the latest arrest brings to 18 the number of stowaways arrested at the Tema Port since the beginning of the year.

It would be recalled that prior to this arrest, some six Tunisian stowaways were also arrested at the Tema Port; they have since been repatriated.

The Port Security Manager stated that with the vigilance and surveillance of port security, all the suspected stowaways could succeed from leaving the shores of Ghana.