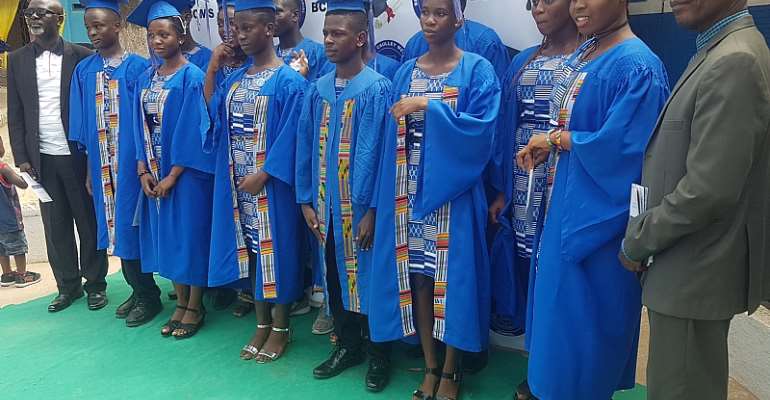 Bennett Caulley Memorial School has celebrated the 49th anniversary of its founder as well as a graduation ceremony on the theme:"Self Actualisation: The Nurturing Of Our Future Leaders".

The school was established on 1st, May ,1969 by the late Mr. Emmanuel Bennett Caulley, the first General Secretary of GNAT in a rented building at Mataheko Circuit 02 District in the Ablekuma Central Constituency, a suburb of Accra.

In the quest to establish the school, Mr. E. Bennett Caulley said mothers trading at the mataheko market wanted a pre-school primary facility not too distant from their places of abode and Advance Preparatory School as it was known at the time responded to that demand.

The school has since been catering for a number of children of school going-age who cannot obtain admission in state-owned schools.

Twelve (12) years later, the school's name was changed to Bennett Caulley Memorial School in loving memory of the founder.

According to the Director of the School, Mr. Bennett Armah Hanson, the theme for the celebration of the anniversary is a reminder that, we cannot achieve self-actualization by being insensitive to the needs of others and the effects of our actions have on our environment.

"Also it reinforces the mandate this school in pursuing the vision of our founder to help children in this community realise their full potential in life. We do not measure our success by the number of doctors and lawyers we produce, but by the character and conduct of our pupils and the impact they make in improving lives in this community," he stated.

He further urged all graduants to take away with them good memories of their Alma mater.

The Member of parliament for Ablekuma Central, Hon. Ebenezer Nii Nartey at the ceremony said there is no best way to reward your ward in this life through any means except giving them the best education they deserve.

"This is because education is the key to success"

He further advised teachers not to be selective, rather, they should unite all children with love to impact knowledge to improve education in the country and the world at large.