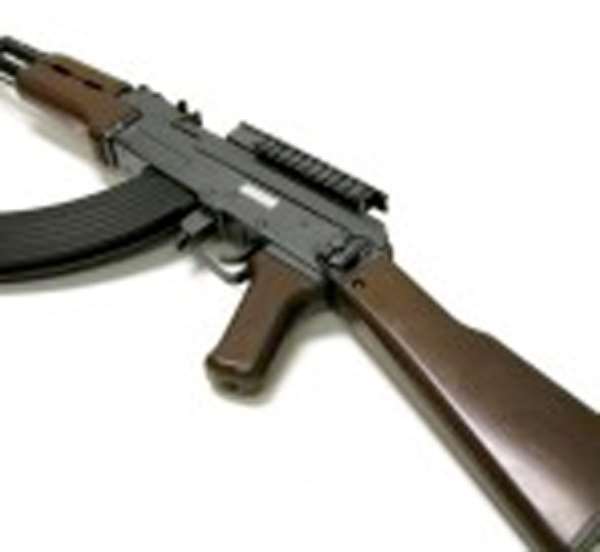 The Upper West Regional Police Command has impounded 75 locally made and foreign guns that are suspected to be used by criminals to carry out robbery attacks in the region.

Three suspects have been nabbed in connection with the confiscation of the firearms and a local manufacturing spot also discovered around Charia community in the Wa Municipality.

The guns included; 36 single barrel guns, one mark 4 gun, one double barrel shotgun, two locally manufactured pistols, one foreign Pistol, 12 butts, 22 barrels, one bench grinder machine and a box of tools were seized from the suspects.

The Upper West Regional Deputy Police Commander, ACP Peter A. Ndekugri, told Journalists that the suspects were arrested on Monday after an officer on duty at Loho police barrier near Kaleo arrested one Nyame Purokiamah aged about 61 who was returning from his farm with a local single barrel shotgun.

ACP Ndekugri said upon further interrogations, the suspect informed the police officer that the gun was handed over to him by his grandson Michael Sonkara aged 32 to test it.

Subsequently, the police arrested Michael Sonkara for questioning who also revealed he bought it from one Bartholomew Daryenkye at Charia, a suburb of Wa.

According to ACP Ndekugri, the police on Monday at 1000 hours escorted Michael Sonkara to the house of Bartholomew Daryenkye, where the multiple guns were retrieved.

'Intelligence gathered indicates that, suspect Bartholomew Daryenkye has been illegally manufacturing guns for criminals to operate,' he said.

The police said security was a shared responsibility and entreated the public to volunteer relevant information to assist them in the arrest of criminals and provide the necessary safety for lives and property.