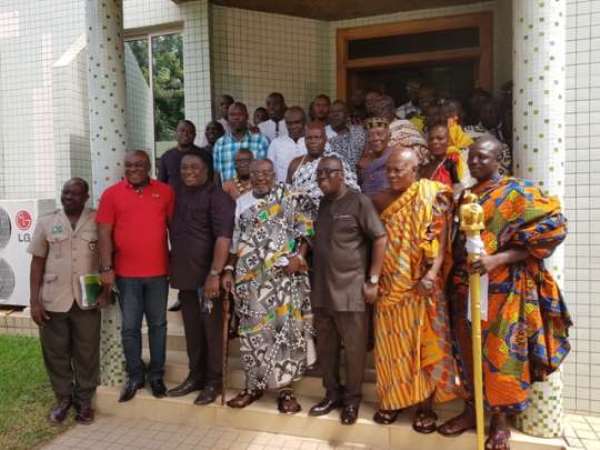 The Forestry Commission has warned the chiefs and people who are selling land at the Sakumo Ramsar Site to stop the practice or face the wrath of the Commission.

Mr Kwadwo Owusu Afriyie, the Chief Executive of the Commission, said the Commission had not authorised any chief or anybody to sell the land or approved the putting up of buildings within the Ramsar site.

He said the Commission would, therefore, demolish all uncompleted structures on the site except those in the demarcated zones to save the site from destruction.

Mr Afriyie was speaking at a stakeholders meeting, which was attended by the Paramount Chief of the Nungua Traditional Area, other chiefs in the surrounding communities and the Member of Parliament for Tema West Constituency, to find a lasting solution to the encroachment on the site.

'Of the five coastal Ramsar Sites, it is only the Sakumo Ramsar Site that is owned by the Government of Ghana. The land in the rest of the four areas are owned by the chiefs and the people of the respective traditional jurisdictions.

'So people look at what is happening at the other sites where the ownership of the land is in the hands of the chiefs and they think the same applies to the Sakumo Ramsar Site,' he said.

Mr Afriyie urged the public to check out the ownership of the land with the Lands Commission or the Forestry Commission before making a purchase to avoid seeing their investments go to waste.

'We called on all chiefs in the area to help the Forestry Commission save the Ramsar Site but not perpetrate illegal activities themselves. It came to light that a chief had wanted to build his palace within the Ramsar Site, which is totally unacceptable,' he said.

Some chiefs also use land guards to prevent staff of the Forestry Commission from doing their work of protecting the Ramsar Site, he said.

He said there were plans to develop income generation opportunities such as 'ecotourism that had the potential to preserve the ecological functions of the Lagoon by dredging to remove the silt, reconnect the sea to the Lagoon so that the fishermen could enhance their livelihoods, and develop water sports as well as create other job opportunities for the teeming unemployed youth.

The Sakumo Ramsar Site was established alongside four other coastal Ramsar Sites in 1992. The Convention on Wetlands of International Importance is an inter-governmental treaty intended to promote the wise use and conservation of wetlands through local, regional and national actions and international cooperation.

Ghana signed unto the Treaty in 1971, in Ramsar in Iran.

The Sakumo Ramsar Site, is one of the most important coastal wetlands that used to receive about 32,500 Migratory Birds in Ghana, made up of 66 different types coming from Europe and Asia.

The wetland also receives most of the waste water from the Tema Township and treats it before releasing it into the sea.