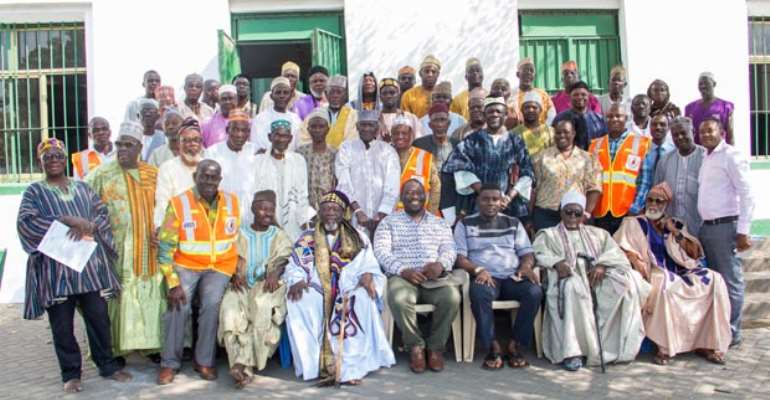 A group photograph of the Greater Accra NADMO team and Zongo Chiefs after the training.

ZONGO CHIEFS within the Greater Accra Region on Wednesday, August 1, went through a one-day sensitization and training on disaster prevention and management at the Abossey Okai Central Mosque in Accra.

The exercise, which was organized by the Greater Accra office of the National Disaster Management Organization (NADMO), sought to sensitize and equip leaders and residents in the Zongo communities on the best ways of preventing and managing disasters.

The training brought together a powerful delegation made up of prominent chiefs from all Zongo communities within the Greater Accra Region led by the President of the National Council of Zongo Chiefs (NCZC), Chief Abdul Kadiri Tahiru.

The training centered primarily on the causes and effects of disasters such as floods and fire outbreaks and proffered some possible solutions to these menaces.

Putting up structures on waterways, dumping of refuse in gutters and other drainages are liable to cause floods while leakages of gas cylinders are sure to cause fire outbreaks.

It was disclosed at the training that persons living in waterlogged areas should be made to park their things and vacate their homes early enough in the event of any downpour before it results in a flood.

Children and the physically challenged should be the first set of people to be evacuated to safer places when floods strike.

Director of Greater Accra NADMO, Mr. Archibald Kobbinah, said contrary to popular perception, NADMO does not sit and wait for disasters to strike before taking any meaningful action.

However, certain obnoxious developments such as bad roads, blockades caused by structures built on waterways and late calls make it difficult for them to trace disaster-laden areas and act on time.

He disclosed that it is the desire of President Akufo-Addo to curb the menace of loss of lives and property through disasters in the country; hence he has charged the leadership of NADMO to sensitize and educate the general public on the best possible ways of preventing disasters from occurring.

He indicated that following directives from the President, Director General of NADMO, Nana Agyemang Prempeh, has charged the Greater Accra branch as well as every other branch of NADMO to go on the grounds and put in place pragmatic measures aimed at preventing disasters in Ghana.

He added that the idea to commence the sensitization exercise with the Zongo chiefs was because the chiefs are people who are highly revered by their people thus making them better placed to drum the message of disaster prevention home in their various communities.

Mr. Kobbinah also asked for the maximum support of the chiefs so that they can build a formidable front together to tackle disasters in the Zongo communities and beyond.

Speaking on behalf of the NCZC, the PRO, Chief Imoro Baba Issah, lauded the initiative and commended the President and leadership of NADMO for recognizing them in respect of such an important development.